Prime Minister Kevin Rudd has called a special caucus meeting for 22 July to discuss direct election of the leadership and the federal election strategy. 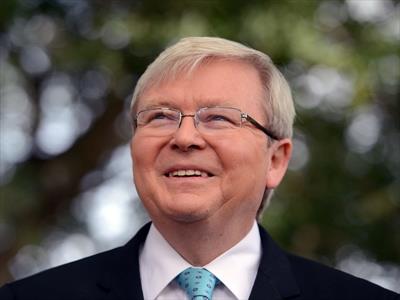 PRIME Minister Kevin Rudd wants grass-roots members to be able to have a say in directly electing the leader of the parliamentary Labor party.

Mr Rudd told reporters in Canberra on Monday he had called for a special meeting of the caucus on 22 July to discuss the federal election and party rule changes.

The key rule change would be enabling the leader of the parliamentary party to be directly elected, with 50 per cent of the vote coming from grass-roots members and 50 per cent from the caucus.

“This is the most significant reform to the Australian Labor Party in recent history,” Mr Rudd said.

Mr Rudd said any candidate for the leadership would need the initial backing of 20 per cent of caucus members.

Other leadership positions such as deputy, House leader and Senate leader, and ministry candidates would be decided by the caucus, he said.

Among the rule changes, a leader who takes the party to the election and wins “that person remains as leader of the party and the government for the duration of that term”, he said.

He says that will prevent anyone walking in to the leader with a challenge and saying: “Ok sunshine, it’s over.”

Mr Rudd believes the reforms will be welcome by all Labor Party members.

He said change was “essential to grow a vibrant modern Australian Labor Party for a modern and diverse Australia for the future”.

“I believe it will encourage people to re-engage in the political process and bring back those supporters who have been disillusioned,” Mr Rudd said.

Mr Rudd said the rule change would improve the quality of government and certainty of leadership.

He said the quality of decision-making would be eroded if leaders had to “look over their shoulders” all the time if there were bad polls. – AAP