Bill Shorten may have the majority support of the ALP caucus for the party's federal leadership but he's going to have a tough fight winning over NSW rank and file members. 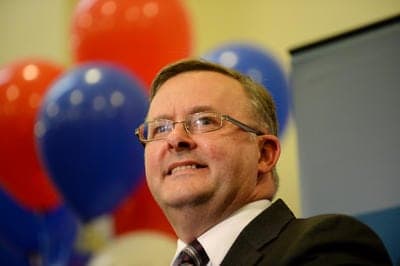 BILL Shorten may have the majority support of the ALP caucus for the party’s federal leadership but he’s going to have a tough fight winning over NSW rank and file members.

The fervent supporters gave the member for Grayndler a standing ovation and cheered “Albo, Albo,” as he entered.

“He is the kind of person that has the integrity and a Labor vision,” she said.

“He has the credibility within the party, he has the standing in the party and he’s got the credentials and the experience to do it.”

Mr Shorten and Mr Albanese have both nominated for Labor’s inaugural ballot of caucus and ordinary ALP members to elect the new federal parliamentary leader in opposition.

The result will be announced on 13 October after a postal ballot of Labor’s estimated 40,000 members and an 10 October caucus meeting.

Mr Shorten says the majority of the ALP caucus is behind him and that he was encouraged by expressions of support from grassroots members.

But that didn’t stop Labor frontbencher Penny Wong throwing her support behind Mr Albanese for leader.

“You’ve got to be clear in mind about your values, your policies… and articulate that to the community,” he told AAP.

“Most importantly, you’ve got to be tough and fight hard and Anthony has all those attributes. I think the times demand him.”

But he expects Mr Shorten will have a lot of support particularly in his home state of Victoria.

“He’d be a great leader if he was elected too,” Mr Combet said.

It is understood Mr Shorten, the Right faction powerbroker, can count on about 54 per cent of the caucus vote.

But the grassroots membership skews to the Left and is likely to favour Mr Albanese.

Mr Albanese is embarking on a three-city tour over the next three days and will be taking along his three word slogan “Vision. Unity. Strength.”

Acting Labor leader Chris Bowen wouldn’t endorse either contender but would attend campaign events if both aspirants were present.

Mr Shorten said he and Mr Albanese had agreed to a “civil debate about ideas, not personalities”.

The pair also agreed that the loser of the ballot would still get a senior role in opposition.

Asked whether he and Mr Albanese had policy differences, Mr Shorten said their values were “quite similar”.

But he added that issues surrounding services for people with disabilities must be kept at the centre of the political stage, and that Labor must still keep the Abbott government accountable during the leadership contest.