The air search for a Malaysia Airlines jet in the Indian Ocean has been suspended because of a tropical cyclone. 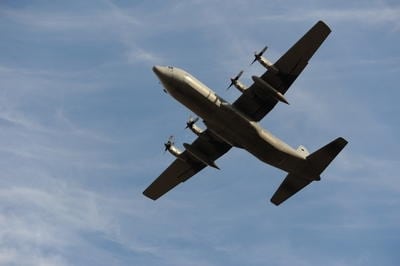 The air search for the missing Malaysia Airlines jet, flight MH370, has been suspended due to a tropical cyclone.

The decision was made on Tuesday just hours after organisers had decided to deploy up to 10 military aircraft.

But the surface search will continue, with 10 vessels scouting for floating debris from MH370, which disappeared over the Indian Ocean on March 8 with 239 people on board.

A Bluefin-21 underwater drone was also being deployed in a search area centred about 1500km northwest of Perth.

The search area has been narrowed to a 10km radius around the site of the second acoustic detection by a towed pinger locator on April 8.

Acoustic signals were also picked up in the vicinity on April 5.

IMAGE: A Royal Malaysian Air Force C-130H Hercules aircraft takes off from Pearce Airbase, in Bullsbrook, 35 kms north of Perth to help in the search for missing Malaysia Airlines flight MH370, on April 17, 2014. On Tuesday the air search was suspended due to a tropical cyclone in the area. (AAP Image/AFP PHOTO POOL, Greg WOOD)