The Palmer United Party has unveiled the first of its Victorian candidates in Melbourne today, with former world champion boxer Barry Michael and AFL legend Doug Hawkins being revealed as the fledgling party’s latest signings. 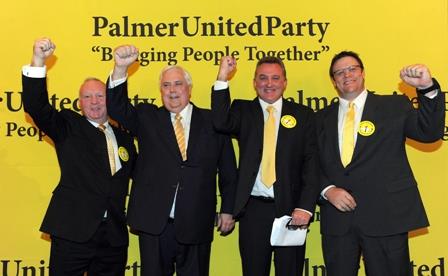 THE Palmer United Party has unveiled the first of its Victorian candidates in Melbourne today, with former world champion boxer Barry Michael and AFL legend Doug Hawkins being revealed as the fledgling party’s latest signings.

Queensland mining entrepreneur Clive Palmer, who founded the Palmer United Party earlier this year, called the press conference to announce that Mr Michael and Mr Hawkins would fill the first and second spot on the party’s Victorian Senate ticket. He entered the Langham Hotel ballroom to the tune of a four-piece bush band playing C’mon Aussie, C’mon and made a lengthy speech claiming that recent leadership woes in the ALP were taking place because “the Palmer United Party has got them spooked.”

Mr Michael said: “Every day Victorian people suffer because of the lack of funds in our health system. Victoria is suffering from the lacks of jobs, from far too high electricity prices, from being forgotten. Communities are fragmented, families are falling apart. The Labor Party has taken Melbourne and Victoria for granted for far too long. And Tony Abbott promises much of the same neglect. I am entering the most important battle of my career. I am not fighting for money. I am not fighting for a title, I am fighting for a fair go for everyone.”

Mr Michael has worked as a fight promoter and commentator since his retirement from professional boxing in 1987 having held the IBF super featherweight title for two years. He won the title in a well-known 1985 fight against Lester Ellis, which resulted in an infamous confrontation between Mr Michael and Melbourne gangland figure Alphonse Gangitano.

Mr Gangitano, who was murdered in 1998, was Mr Ellis’s promoter and lost a significant amount of money as a result of Mr Michael winning the 1985 bout. The pair were later involved in an altercation in a Melbourne nightclub that resulted in Mr Michael being bashed and having a large piece of a flesh bitten from his cheek.

Mr Hawkins, who played 329 games for the Footscray Bulldogs, said that he had been motivated to become a PUP candidate largely due to the rising cost of living, referring to friends that “were unable to turn the heating on if they choose to watch TV for an evening.” He said that he had kicked a lot of goals in his time, and looked forward to “stick(ing) it up ‘em” in Canberra.

The selection of prominent sportsmen like Mr Michael and Mr Hawkins as candidates for the Palmer United Party follows on the heels of rugby league icon Glen Lazarus being selected to lead the party’s Senate ticket in Queensland. Mr Palmer has promised that more recognisable identities from a variety of backgrounds would be revealed as Palmer United Party candidates in coming weeks.

Mr Palmer also endorsed nine other candidates that would run for election to the House of Representatives in a number of Victorian electorates. He announced that real estate agent and community television host Jason Kennedy would run in the marginal seat of La Trobe, joining the likes of futures trader Luke McNamara in Kooyong and physiotherapist Nataliya Shkuratova in Goldstein.