The ABC will stop making the animated version of Bananas in Pyjamas, featuring loved children's characters B1 and B2. ABC have seen a recent decline in overseas merchandise sales. 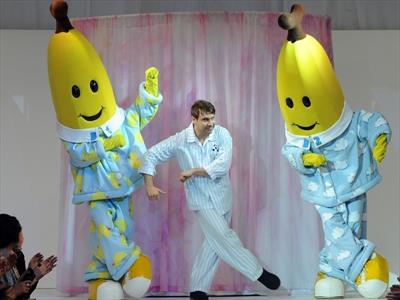 POPULAR kiddies characters B1 and B2 are being put to bed for a good long nap.

ABC acting director of television David Anderson told AAP the network would stop making the animated series of Bananas In Pyjamas in July, although no one will lose their jobs.

A decision will be made in 2014 on whether any further series will be commissioned, he said.

“In order to make the most of our significant investment in this much-loved program, we will continue to air the 156 episodes for the remainder of 2013 and ongoing,” Anderson said.

“Another series of Bananas in Pyjamas will go through the usual commissioning process… this is expected to occur sometime in 2014, a decision will then be made.”

Anderson dismissed media reports that the ABC had cancelled the series because it had become too expensive to produce in the wake of a decline in merchandise sales.

It’s been reported that it costs $100,000 to produce every 30 minutes of screen time of Bananas In Pyjamas, which airs in more than 130 countries.

Anderson said decisions to produce shows are not based on their commercial viability or merchandise sales.

“ABC TV’s commissioning decisions are primarily based on editorial considerations and available resources.

“The ABC’s decisions about commissioning new content are not dependent on financial returns from earlier series.”

The last of 156 episodes of the animated version, based on the original 1992 live-action series, will air on ABC2 in July.

While the ABC will stop making the series, it will air repeats on ABC2 for the remainder of the year.

“It is not uncommon to air a short-run animation program for a pre-school audience more than twice per year,” he said.