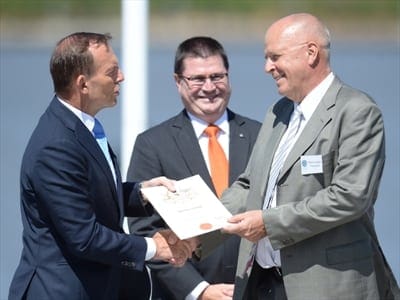 BECOMING an Australian citizen on the same day he and the citizenship turned 65 was destiny for Niels-Jorgen Toxvaerd.

The Sydney man was awarded his citizenship certificate by Prime Minister Tony Abbott and cut a birthday cake with Governor-General Quentin Bryce at the national citizenship ceremony in Canberra on Sunday.

He’s lived in Australia for 20 years and says that over the past few years he’s realised he felt more Australian than Danish.

“When you are a first-generation immigrant you’re always a little bit lightfooted, where to actually belong,” he told AAP.

“It was a very emotional thing for me just to take the last step and become a citizen, being able to vote and being able to fully participate in Australian society.

Sunday marks the 65th anniversary of the Nationality and Citizenship Act, which created the status of Australian citizen.

Since 1949 more than 4.5 million people have become Australian citizens.

Mr Toxvaerd was one of 24 new citizens who took their oaths, led by Mr Abbott, beside Canberra’s Lake Burley Griffin.

Cherie Post, originally from Louisiana in the US, said attaining citizenship was a dream come true.

She celebrated her 30th wedding anniversary with Australian husband Greg in 2014.

“He was my Prince Charming that I met in Baton Rouge (in the US) that I followed to the greatest country in the world and now I’m a part of it,” she told AAP.

Ms Post greeted Mr Abbott on stage with a big hug, later saying that it was “the spirit of aloha” she picked up while living in Hawaii.

The prime minister may have needed the cheerful greeting, as Sunday’s was the first citizenship ceremony he’s conducted.

His message to the nearly 18,000 people becoming citizens around the country was, “Welcome to the team”.

National Australia Day Council chairman Adam Gilchrist likened becoming a citizen to joining a family – one with its own rules both written and unwritten.

“Like any family, we may not always get along but in the end we must continue to support each other, from our earliest citizens to our newest members,” he said. -AAP