Abbott pledges compo for terror victims within 100 days of election

AUSTRALIAN ELECTION 13 | Australian victims of past terrorism attacks will receive compensation if the coalition wins the election. 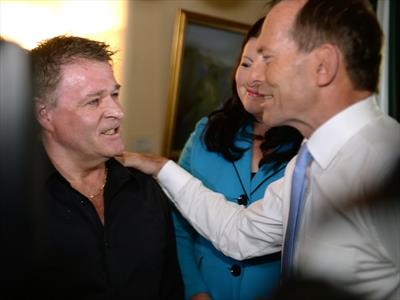 OPPOSITION Leader Tony Abbott has made a “solemn pledge” to extend compensation to Australian victims of overseas terrorist attacks dating back to September 2001.

Mr Abbott says a coalition government will move in its first 100 days to compensate Australians who were victims of attacks in New York, Bali, Jakarta, Mumbai and London.

His plan will extend the scheme Labor introduced in 2012 – which offers victims $75,000 – by making it retrospective.

“To it’s discredit (Labor) never made the retrospective declarations necessary to ensure that victims of these terrible atrocities overseas would receive that modest compensation,” Mr Abbott told reporters in Newcastle.

“An incoming coalition government will finally provide a measure of justice to the Australian victims of overseas terrorism.”

Mr Abbott, who was in Bali after the 2005 bombings and helped at Sanglah Hospital, said the matter was personal not political for him.

“Your role in all this has been extraordinary,” he told Mr Abbott at the event.

Mr Abbott helped arrange for Mr Anicich to be airlifted out of Bali for urgent medical treatment in Singapore.

“You can imagine the gratitude that I have for you,” Mr Anicich said.