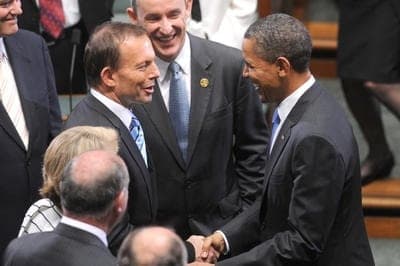 When Tony Abbott meets with US President Barack Obama for the first time as prime minister they won’t be the only politicians in the room.

Vice-President Joe Biden will be joining them.

The prime minister’s Washington DC debut on Thursday will be a far cry from the two days spent in the Canadian’ capital Ottawa.

Mr Harper also laid on Australian flags along the main streets of Ottawa, a military honour guard welcome to Canada’s Parliament and a joint media conference.

Mr Obama, Mr Biden and Mr Abbott will hold talks at the White House on Thursday on trade, security and defence issues.

The Vice-President attended Ukraine President Petro Poroshenko’s inauguration and is expected to contribute to a discussion on Russia’s actions in that country.

Also on the agenda will be the Asia-Pacific free trade deal known as the Trans-Pacific Partnership and the G20 which Australia is hosting in November.

Defence issues will include the future of Afghanistan, the rotation of US Marines through Darwin and global hotspots such as Syria, North Korea and parts of the Asia-Pacific.

IMAGE: Tony Abbott (left) greets Barack Obama (right) in the House of Representatives chamber at Parliament House in Canberra during the US president’s 2011 visit to Australia. The pair will meet again on Thursday during Mr Abbott’s visit to the US. (AAP Image/Alan Porritt)