Australian Prime Minister Tony Abbott met with British Foreign Secretary Phillip Hammond to discuss the humanitarian crisis in Iraq and the situation in the Ukraine. 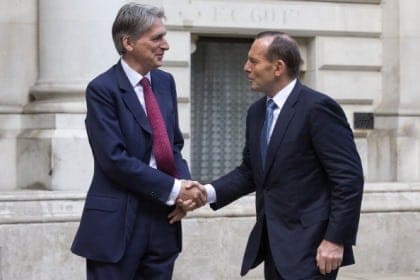 Australia’s prime minister Tony Abbott met with UK foreign secretary Phillip Hammond this week in London where they agreed that urgent support was needed in eastern Ukraine and Iraq to address humanitarian needs.

The statesmen also agreed that Russia must cease their support for separatists responsible for instability in Ukraine and that Iraq’s political leaders must urgently form a government which can take an inclusive approach to challenges posed to the Iraqi society.

In a British Foreign Office press release on Tuesday, Hammond said: “I was pleased to welcome Tony Abbott to London. Britain and Australia have a long history of close cooperation and, with our shared values, we work together on many global challenges.”

Mr Hammond also extended his condolences for the 38 Australian lives lost on Malaysian Airlines flight MH17 saying, “Both Australia and Britain are united in their determination to establish responsibility for this heinous crime.”

Mr Hammond also stated that the he and Mr Abbott agreed that urgent support is needed for the ICRC-led operation addressing humanitarian needs in the Ukraine.

He added: “We agreed that Russia must cease its support for the illegal armed separatists who are responsible for creating the instability in eastern Ukraine.”

According to the statement, Mr Abbott and Mr Hammond also discussed the ‘appalling humanitarian situation in northern Iraq’ and said the UK and Australia are equally concerned about the terrorist threat from ISIL.

In the meeting, both countries confirmed their support of the current ceasefire in the Gaza district hoping it will extend into an ‘enduring cessation of hostilities’ believing that this will “create the conditions for an improvement in the lives of ordinary Gazans, while protecting Israel’s security,” the statement read.