Turnbull and Bishop team up to tweet ‘secret meeting’ away

After it was rumoured that Malcolm Turnbull and Julie Bishop were having a secret meeting in Sydney, the pair took to Twitter to scoff the claim and give their alibis. 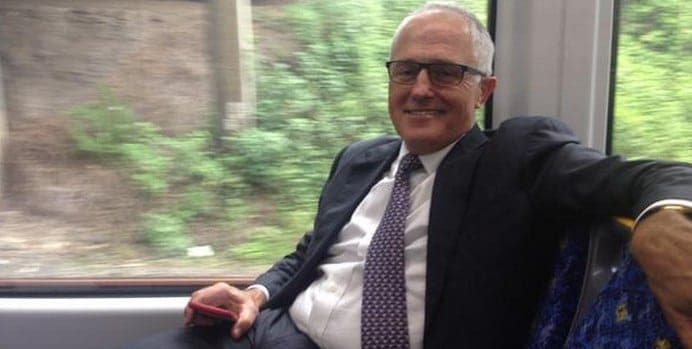 The Abbott leadership kerfuffle has got everyone so jittery and excited that a single tweet this morning sent journalists’ keyboards flying, and TV networks calling in their helicopters to hover over Malcolm Turnbull’s house.

Channel 9’s Ben Fordham claimed that it was a “fact” that a secret meeting between top Libspill contenders Turnbull and Julie Bishop was set to take place at the communications minister’s swanky Sydney pad today. Eyes gleamed and sweaty hands rubbed together as the question lingered in the air: Could Tony Abbott’s two strongest potential replacements be plotting a power sharing alliance?

Interesting fact – @JulieBishopMP and @TurnbullMalcolm have arranged to meet at his Sydney home today. #auspol

But unfortunately, all good rumours must come to an end. Turnbull was in fact on his way to NSW Central Coast for an NBN event, and happily provided live snaps on Twitter to prove his whereabouts.

@BenFordham you need to improve yr surveillance! I am on the train to Tuggerah. PoliticsinPub Nth Wyong 2nite pic.twitter.com/vc0VKybUAz — Malcolm Turnbull (@TurnbullMalcolm) February 5, 2015

And now for some Hawkesbury River pix from the train! very scenic if not rapid. pic.twitter.com/ItDSm2Kr2q

Bishop was also quick to deny the claims and tweet her alibi.

But Fordham was unrelenting…

@JulieBishopMP okay.. and just to clear it up once and for all.. You did NOT meet with Malcolm at his home this morning ?

To which Bishop replied:

@BenFordham I did not meet @TurnbullMalcolm at his home – I even told you @Qantas flight I was on! So what’s the point you’re (not) making? — Julie Bishop (@JulieBishopMP) February 5, 2015

For good measure, Turnbull took a snap of himself arriving at his destination.

But Fordham was still not convinced.

@TurnbullMalcolm At the risk of coming across as obsessed, can I kindly ask you confirm you did not meet Julie today? *ducks rotten fruit*

Now Turnbull started to get a bit annoyed…

@BenFordham, you have to let this go. No I have not met @JulieBishopMP today and won’t unless she comes to the Dam Hotel North Wyong tonight — Malcolm Turnbull (@TurnbullMalcolm) February 5, 2015

So Bishop added some emojis to lighten the mood.