As the premiers organise a fight-back meeting over the federal budget, Prime Minister Tony Abbott says there's still money available for them. 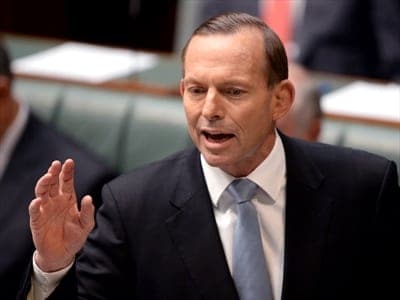 Prime Minister Tony Abbott has warned angry state and territory leaders they must accept there are “swings and roundabouts” when it comes to federal money.

Premiers and chief ministers have organised a meeting this Sunday in Sydney to discuss the federal budget’s $80 billion cut to school and hospital funding.

The call for a meeting comes as Labor and the Greens are poised to block many of the budget measures. The government will have to negotiate with new Senate crossbenchers after July 1 to pass a new Medicare co-payment and pension and welfare changes.

The next state leader to face an election, Victorian Premier Denis Napthine, said he had a long and strong conversation with Mr Abbott on Thursday about the budget.

“We have from between 2014 and 2017 to absolutely shake the federal government from their top to their bottom so they understand their responsibility to meet their share of public hospital payments,” the Liberal premier said.

Mr Abbott told parliament he had made it clear to the states and territories that in 2017/18 there would be a “lower rate of increase” in funding.

Arguing that road funding was boosted in the budget, Mr Abbott said: “As far as the states are concerned, there are swings and roundabouts.”

Treasurer Joe Hockey backed the prime minister, saying the states would still receive $400 billion in the six years from 2017 for schools and hospitals once agreements signed with the previous Labor government expired.

“It is not cost-shifting because we don’t run the schools or hospitals,” he said.

Opposition Leader Bill Shorten accused the prime minister of deceit, having promised before the election no cuts to health or schools, no new or raised taxes and no changes to pensions.

He estimated that some families would lose $5000 a year because of budget measures.

Mr Abbott and Mr Hockey admitted getting the budget through the Senate could require horse-trading, but said Labor should pass the legislation and take responsibility for leaving the books in a mess.

“I’ve got some advice for Tony Abbott … why don’t you horse-trade away your paid parental leave scheme and leave the pensioners alone,” Mr Shorten said.

Labor has yet to decide whether to support a temporary income tax rise for people earning more than $180,000 a year, but it will oppose the Medicare co-payment, pension changes and the fuel tax lift.

Mr Hockey said the $7 Medicare co-payment was only about the cost of two middies of beer and much less than the $22 cost of a packet of cigarettes.

The Greens will support the fuel tax rise.

The treasurer rejected a challenge from shadow treasurer Chris Bowen to debate the budget at the National Press Club next week.

Mr Shorten is due to give his budget-in-reply speech at 7.30pm on Thursday.