Tony Abbott has confirmed plans to visit Europe and the US in June and expects to meet Barack Obama. 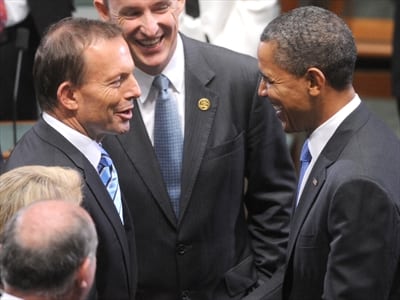 Tony Abbott has confirmed plans to meet with Barack Obama when he makes his first prime ministerial visit to the United States in coming weeks.

The prime minister is expected to have face-to-face talks with the president at the White House in June.

“I am planning to go to the United States in the middle of the year and I’d certainly expect to have a meeting with the president,” Mr Abbott confirmed to Fairfax Radio on Tuesday.

Mr Abbott will lead a large business delegation to the US. The visit will also include a trip to New York.

The prime minister is also expected to visit Canada for talks with Prime Minister Stephen Harper.

But the trip will begin in France, with a visit to Normandy to mark the 70th anniversary of D-day. Mr Abbott is also expected to visit other European World War I battlefields.

Mr Obama is expected to make his second presidential visit to Australia in November, for the G20.

The White House on Tuesday confirmed in a statement that Mr Abbott would visit Washington on June 12 for meetings with Mr Obama aimed at “deepening their nations’ close alliance”, French news agency AFP reported.

“The two leaders will discuss a range of issues of mutual interest, such as the Trans-Pacific Partnership, Australia’s leadership of the G20 this year, the future of Afghanistan, and the growing bilateral defence relationship, including the rotation of US Marines through Darwin,” the statement said.

“They will also address some of the most serious security issues that confront both Australia and the United States, including Syria, Russia’s actions in Ukraine, North Korea, and the security and stability of the Asia-Pacific region.”

The statement described Australia as “a valued friend and stalwart ally”.

“The President looks forward to working with Prime Minister Abbott to deepen US-Australia cooperation on these and other issues,” it said.

The statement was released just before Mr Obama was due to leave the Philippines, ending an Asian tour that also took him to Japan, South Korea and Malaysia. – AAP