AUSTRALIAN ELECTION 13 | Opposition Leader Tony Abbott admits he was "a bit exuberant" when referring to the sex appeal of a female Liberal candidate. 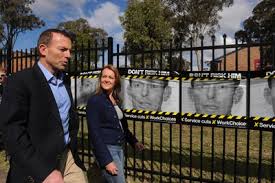 OPPOSITION Leader Tony Abbott admits he was “a bit exuberant” when referring to the sex appeal of a female Liberal candidate.

Social network contributors and Labor pounced on Mr Abbott’s gaffe on Tuesday during a visit to the key marginal seat of Lindsay in western Sydney.

Standing between his daughter Frances and local Liberal candidate Fiona Scott, he was asked how the latter compared with her coalition predecessor Jackie Kelly.

“They’re young, they’re feisty and I think I can probably say have a bit of sex appeal,” he told reporters.

Leaving his daughter wincing, Mr Abbott was later forced to explain himself.

He said Ms Scott was a smart, hardworking woman with whom he was proud to be associated.

“I was a bit exuberant today … but we’re all working incredibly hard to get her elected,” Mr Abbott told reporters in Brisbane on Tuesday night.

But by the time Mr Abbott tried to explain himself, a backlash was underway against the man who has a record of gaffs about the role of women.

“Sometimes we should think Tony Abbott really hasn’t crawled out of the 1950s.”

The coalition camp worked to brush off the remark.

“It was just a light-hearted comment, which I’m sure was not meant with any offence,” Opposition assistant treasury spokesman Mathias Corman told Sky News.

Coalition finance spokesman Andrew Robb said the comment was made in “jest” and talked up Mr Abbott’s deep respect for women, including his professional wife Margie, three daughters, and sister.

However Twitter exploded with opinion on the subject, much of it criticising Mr Abbott.

“So @TonyAbbottMHR thinks a woman candidate is vote-worthy if she has #sexappeal ? #mysogynist” posted one person.

The Twitter account for NSW Labor also weighed in: “On September 7 we should vote for candidates based on #policyappeal not #sexappeal”.

“I think a lot of politicians are described as sexy,” she told Macquarie Radio.

The clanger comes a day after Mr Abbott’s incorrect use of the word “suppository” during a press conference attracted widespread publicity.

Tuesday’s comment risks overshadowing the coalition’s efforts in Lindsay, a seat currently held by Labor’s David Bradbury by a 1.1 per cent margin.

Mr Abbott also used the visit to announce that a coalition government will provide $12 million for a sport and community centre at Penrith.

James Shipton, chairman of the Australian Securities and Investments Commission, has stood aside after an adverse Audit Office report about...

Seymour had endured many years of neglect before his new owner and a team of university medics and engineers got...

The volume of plastic the world throws away every year could rebuild the Ming Dynasty’s Great Wall of China –...

Coronavirus fears had people either ordering necessities for delivery or rushing through stores as fast as possible, avoiding everyone. When...