Prime Minister-elect Tony Abbott has announced his new cabinet and ministry line-up in Canberra, and has come under fire for including only one woman — Julie Bishop — on the team. 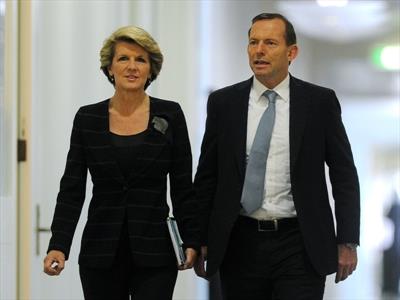 PRIME Minister-elect Tony Abbott says his new ministry is one of the most experienced in the coalition’s history and reflects some significant promotions.

Mr Abbott announced his cabinet and outer ministry team in Canberra on Monday, nine days after the coalition’s election win over Labor.

“This is one of the most experienced incoming ministries in our history,” he told reporters.

“You’ll see there is enormous stability in this team but there has been as well some significant promotions.”

Most of Mr Abbott’s cabinet from opposition remains intact, but almost all the portfolio titles have been streamlined – in an end to the super ministries that existed under Labor.

“With grandiose titles of the former government, it sometimes seemed that ministers needed an extra large business card to contain all of their various titles,” he said.

The new cabinet ministers have short titles – such as Minister for Education – while MPs in the outer ministry are described as “Assistant Minister”.

“I’m determined as far as humanly possible, to have clear lines of authority,” Mr Abbott said.

Some ministers would have other areas of responsibility, like health minister Peter Dutton who will also oversee mental health.

“I want to get away from this idea that unless you have minister with your specific interest in his or her specific title, that there is going to be any lack of concern,” Mr Abbott said.

His takes the portfolio from former finance spokesman Andrew Robb, who becomes Minister for Trade and Investment.

Julie Bishop retains the foreign ministry, but loses trade, which the Nationals had hoped – but failed – to take back in government.

Liberal Sophie Mirabella, who is still fighting for her political survival in her Victorian seat of Indi, is not in the ministry line-up.

She was shadow minster for industry, but the position went to Ian Macfarlane, who will also oversee energy and resources as he did in opposition.

Mr Joyce moved from the Senate to the lower house at the election and takes the portfolio from fellow Nationals MP John Cobb, who now has no ministry position.

Asked about Mr Cobb, Mr Abbott said no one had missed out because of poor performance.

“They have missed out because I have simply had to make some changes,” he said.

Mr Abbott’s cabinet will be sworn in on Wednesday. – AAP