Defence and trade have dominated the first leader-level meeting between Tony Abbott and Barack Obama. 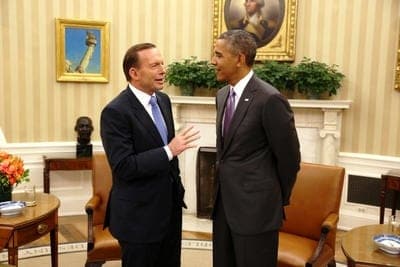 More American troops and military assets including ballistic missiles could come to Australia after Prime Minister Tony Abbott and US President Barack Obama agreed on a new set of rules.

Mr Abbott met Mr Obama for more than an hour at the White House on Thursday, discussing trade and investment and signing a deal known as the Force Posture Agreement.

The meeting came at a dramatic moment in Washington DC as White House and national security officials scrambled to deal with the jihadist capture of major cities in Iraq.

“Iraq is going to need more help from the United States and from the international community,” the president told reporters gathered in the Oval Office for a briefing on his talks with Mr Abbott.

“Our national security team is looking at all the options … I don’t rule out anything.”

Mr Abbott told the Nine Network there had been no request for Australian troops.

UN general assembly goes virtual: a former ambassador on what that means for diplomacy

But he noted: “No one can think that this is just a matter for people on the ground in Iraq.”

“This is a serious situation. It would be a very serious and critical development for the world generally if a large chunk of Iraq was to fall into the hands of al Qaeda-type terrorists,” he said.

The Force Posture Agreement will allow the US over the next 25 years to expand military assets in Australia beyond the marines rotation and US Air Force aircraft.

With the troop levels already set to rise from 1150 to 2500, it is understood expansion could include new facilities, more US ships coming to Western Australia, missiles and joint exercises involving Australian, US and Asian militaries.

The president praised Mr Abbott for ensuring Australia’s defence budget was increased “even under tough times”.

“Aussies know how to fight. I like to have them in a foxhole when we are in trouble.”

Mr Abbott said the US should not have to do all the heavy lifting by itself.

“I want to assure the president that Australia will be an utterly dependable ally of the United States,” he said.

The pair also discussed the Trans-Pacific Partnership trade agreement, involving Australia, the US and 10 other countries.

Mr Obama said he remained committed to a successful outcome in the negotiations.

The talks included a frank discussion on climate change.

It is understood Mr Obama told the prime minister he was aware of the clear mandate the coalition government had received to scrap the carbon tax.

Mr Abbott said he was committed to Australia’s emission cut targets and his plans were not all that different to the US strategy.

Mr Obama was presented with a Sydney-made surfboard decorated in an Air Force One theme and swapped surfing stories with Mr Abbott.

Queensland Police raid medical practices and seize drugs said to be destined for illegal onward sale to the public.

The UN general assembly is the prime venue for diplomatic speed dating – seeing as many fellow leaders as possible...