With the federal government facing protesting premiers, street marches and a drop in the polls, Tony Abbott and Joe Hockey step up their budget pitch. 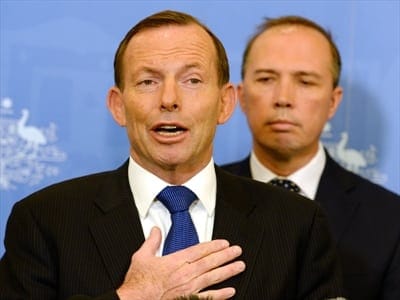 Tony Abbott and Joe Hockey have moved to assure nervous coalition colleagues and the business community the budget may not be popular but it is right.

Newspoll and Fairfax-Nielsen opinion polls show a sharp drop in the primary vote for the coalition after last week’s federal budget, putting Labor in an election-winning lead.

Anger over budget measures boiled over on the weekend, with street marches through major cities and a meeting of premiers in Sydney on Sunday vowing to fight $80 billion in school and hospital funding cuts.

The treasurer told a NSW Liberal Party luncheon in Sydney, in an off-the-cuff pep talk, the government was focused on doing what is right.

“We didn’t go through all the pain of politics … and all the dark days of opposition to get back into government and do the things that might please people,” Mr Hockey said.

Mr Abbott, who visited a medical research facility in Brisbane on Monday, said selling a tough budget was never going to be easy.

He said the Howard coalition government had also taken a hit in the polls after the 1996 budget, which cut public spending.

Facing claims of breaking election promises, the prime minister said the coalition’s four “elemental commitments” were to stop the boats, scrap the carbon tax, build roads and get the budget under control.

Premiers and chief ministers want an emergency meeting with Mr Abbott, saying cuts to health and education funding will have an immediate impact.

But he said hospital funding was still set to rise, just not as much as under Labor’s “pie in the sky” plan.

Victorian Liberal premier Denis Napthine, who faces an election in November, said the cuts would have an immediate impact.

“We need to sit down and sort that out,” he said.

Opposition Leader Bill Shorten said he understood the anger among the premiers and protesters.

Mr Abbott had been “put on notice” to make the budget fairer.

“This budget is most certainly an unreasonable and unfair attack on pensioners, on the sick, on the needy and on the poor of our society,” Mr Shorten said.

Palmer United Party leader Clive Palmer told a function in Brisbane his party’s senators would vote against raising the pension age to 70, the GP co-payment and the six-month delay before under-30s can receive the Newstart allowance.

“We don’t want to increase the youth suicide rates,” he said of the tighter welfare rules.