REVIEW | Xavier Rudd performed to sold out crowds in South Africa, offering a taster of the amazing musical talent in store for London when he plays at Koko in June.

by Jackie Lampard
in Lifestyle 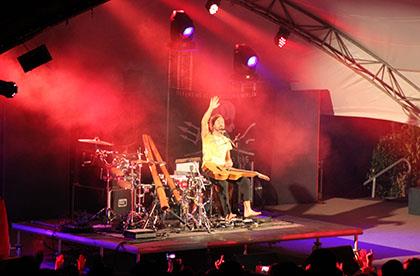 WITH an enchanting view of city lights in the background, the open air arena of Kirstenbosch Gardens at the foot of Cape Town’s Table Mountain made for the perfect setting for my first Xavier Rudd experience. Blankets and picnic baskets, filled with homemade snacks and wine, were strewn across the grassy stadium as people waited in anticipation to see Aussie musician Xavier Rudd live in Cape Town for the very first time.

An hour long opening set from South African artists Jeremy Loops and Farryl Purkiss warmed up the crowd. Not long after, a barefoot Xavier Rudd stepped up to induce goose bumps across the sold out arena with his opening track ‘Solus’. Rudd, the one-man-band, showed off his instrumental talents with a diverse line up of several didgeridoos, drums, bar chimes, a harmonica, stomp box and lap guitar.

Arms waved and the crowd sang along as he played through his two hour set. Even those who had never before heard his talents were dancing (or rather bobbing) to his musical genius.  One of his fans attempted a stage dive, but nothing got the crowd going like ‘Buffalo Soldier’ – a cover of the hit Bob Marley track. Rudd could barely be heard over the loud chanting of the audience. The adapted lyrics — ‘God save Australia, God save South Africa’ — resonated throughout the crowd.

To finish off the set Rudd treated the audience to ‘Culture Bleeding’, before taking a bow and heading offstage. After much pleading from the crowd, the acoustic master returned to wow his fans with a performance of ‘Spirit Bird’ before ending the night with a poem. Boomerang held high, his spiritual nature shone through as he shared a blessing for the earth, the people, and the ancestors of the land we encompass.

Xavier Rudd is performing at Koko in London on 24 June 2013. For tickets see www.livenation.co.uk.