With GoodWil | Wil Anderson on life, legs and the Logies

INTERVIEW | Ahead of a two week run at London’s Soho Theatre, Wil Anderson takes a breather to speak with BONNIE GARDINER about his life, his legs and his comedy. 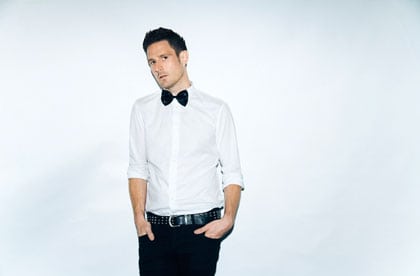 POPULAR Australian comedian Wil Anderson is set to touch down on UK shores this month, bringing his show GoodWil to the equally popular Soho Theatre for a two week run. It is a match made in heaven, although Wil admits his arrival is not without a healthy dose of fear.

“Touring the UK in an Ashes year can always be a tricky prospect,” Wil tells Australian Times.

“Last time the Ashes were on, and I was in town, I got booed at one gig before I even got onto stage.”

The show kicked off as part of the 2013 Melbourne International Comedy Festival, where Wil performed in the majestic Princess Theatre. It is a venue which he believes to be one of Australia’s best.

“Ten years ago I recall how thrilled I was walking on that stage for the MICF Opening Gala and thinking how amazing it was I got to tell my dick jokes in a room so beautiful.”

But it’s not all glamorous settings for the comedian, who says his most difficult or unusual gigs often make for the most enjoyable shows.

“I like the challenge of getting it to work wherever you go. For example, I did a gig in a log cabin in the middle of Alaska to 65 people, and enjoyed it as much, if not more than, any other show I have done this year,” he says.

“There is something about stepping onstage in front of a room filled with people who have never heard of you before and making them laugh – that is thrilling.”

This will be Wil’s third visit to London since being diagnosed with osteoarthritis in 2011. Following years of terrible back pain, Wil joked in previous shows that his first reaction to the diagnosis was ‘I can never go on The Amazing Race‘.

“On the upside it has given me a lot of new material,” he says.

“On the downside, in a few years I won’t be able to walk anymore. I will be the stand-up comedian that can’t actually stand up.”

In the same vain as Stephen Fry and bipolar disorder, or Sarah Silverman’s battle with clinical depression, it seems the people who bring laughter to the world often struggle away from the spotlight. But despite his condition, Wil feels he is one of the lucky ones.

He seems to be embracing this material for the better, having already played such coveted roles as TV show host and political commentator for ABC programmes The Glass House and The Gruen Transfer, radio presenter, as well as weekly newspaper columnist for The Australian, all while trotting the boards with his stand-up routines.

But with such diversity, Wil says he has no preferred job title.

“I think in general labels are unhelpful and limiting.

“All I really would like is for people to think I am funny, and then give me money to be funny so I don’t have to get a real job.”

The best part of being a comedian, compared to other roles, says Wil, is that people are happy to see you.

“They applaud when you walk onto the stage. That doesn’t tend to happen if you’re an accountant, right?

“Plus it’s indoor work, with no heavy lifting, and I can drink at work, which they don’t let you do if you are a pilot.”

Fame and fortune are probably an added bonus, but Wil believes these are not measures of success. If they are, they won’t make you happy. As a rich and famous person who specialises in making people happy, Wil should know.

“If you’re getting into comedy for fame and fortune then you are doing it for the wrong reasons,” he says.

“My Dad said that the secret to being happy is finding something you would do for free, and then conning someone into paying you to do it. I think that’s still pretty sound advice.”
Like many comedians who make it big, Wil has seen his fair share of scrutiny. The main backlash came however after a social media spat during the 2010 Logie awards.

To his 30,000 followers Wil tweeted a running commentary comparing John Mayer’s career to herpes, joking that avid anti-drugs advocate Molly Meldrum was under the influence of pills, and describing actress Sigrid Thornton as like Gollum from Lord of the Rings.

Twitter was subsequently banned from the 2011 Logies, and Meldrum accused Wil of having an ego “through the roof”. Wil is not shying away from the experience.

“There is a whole piece in GoodWil dedicated to the Logies and the fall-out that ensued,” says Wil.

Yet he acknowledges freedom of speech does come with responsibilities.

“My approach is generally to just say what I think, what I truly believe, and get it right. Then if someone is offended by that, then that is their issue and not mine.”

It’s an approach that might best be summed up with the final line he ever uttered on The Glass House: “In the words of our Lord and Saviour Jesus Christ, f*ck ‘em if they can’t take a joke!”

In the end, comedy for Wil Anderson is about finding your own unique qualities, which has proven challenging with so many great Aussie comedians to contest with. He says identifying your own voice is the most important aspect of great comedy, and it’s a ongoing process.

“I have been doing comedy for 18 years, and I only feel like I truly started to discover my comedic voice in the last four shows I have done,” Wil says.

“That said, a lot of people still confuse me with Adam Hills.