THE VOICEbox | Week 2: More auditions and crazy mums as the battle of the judges hots up. 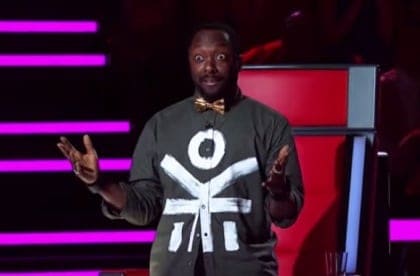 So we’re still in the midst of the blind auditions of The Voice Australia 2014 — so much that we had four nights of it last week – and another three this week – as the judges assemble their teams.

And, as a number of other commentators have mentioned — if last year was all about the charm and swagger of Ricky Martin — this year, will.i.am is the judge everyone is talking about.

The Black Eyed Peas star and hit producer has been a total standout when it comes to wooing hopefuls onto his team.  His unique mix of kooky one-liners, stories about the time he wrote that hit song with that A-list star and some unique analysing methods has not only been amusing to viewers, but it’s helped him land some of the most sought after acts.  Such has been his impact, Joel Madden had to resort to pulling out and wearing a mask of Will’s face to try and make some noise.

Yet despite Will’s interesting approaches, he was unsuccessful in arguably the biggest showdown of the series yet, which had all four judges out of their chairs and begging for former Korean opera singer Elley Oh after her killer rendition of Jessie J’s Mumma Knows Best.  Despite whipping out a white microphone to help get his points across and making up a story about some K-Pop stars choosing his bag for him, Elley was snared by Ricky Martin.

Obviously with all these auditions, there’s quite a few fam and friends who come to cheer the contestants along and divulge the stories about their youth and how much they love them.  Taking the cake this week was the mum of Central Coast 20-year-old Brandon Duff – who got him into music lessons when he was four years old and forced him to dress up as a clown for her children’s party business during his youth. Poor kid.

Brandon predicted his mum would be rather loud in the ‘waiting room’ while he was performing on stage — and he wasn’t wrong.  After crying tears of joy and giving thanks to God after Ricky Martin turned around for him at the last second, she led a celebratory rendition of The Wizard Of Oz… renamed ‘The Wonderful Ricky Of Oz’.  Errr… mum, you do know he’s Puerto Rican, yeah? 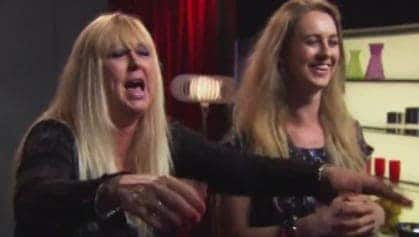 The Voice Australia 2014: Brandon’s mum as the Emperor from Star Wars, trying to turn the judges.

Through the week, Kylie gave some wannabes a second shot at reviving their musical careers by adding them to her team. This included Sydney’s Hayley Jansen — who came fourth in the second season of Australian Idol ten years ago, the year Casey Donovan won (remember her?).  Joel was so annoyed at overlooking her that he slipped off his chair when it turned round at the end of Hayley’s performance (dumbass!)  Kyles also picked up Melbourne’s Tom Oliver, who had been rejected in season one when he performed in a duo with one of his mates.

But arguably the most talked-up performance (and hyped up by Channel Nine) was that of the mohawked, out-and-proud 24-year-old minister’s daughter Jess Berney from Adelaide, who brought a touch of opera to the show with her rendition of Pie Jesu. 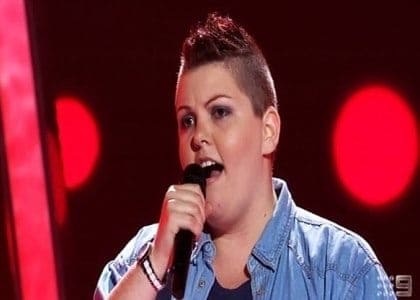 The Voice Australia 2014: Holier than thou, Jess Berney

Delivering arguably the same amount of initial shock as with past winners Karise Eden and Harrison Craig (although not as fast in hitting the buzzers), all four judges staked their claim for Jess — but ultimately, she sided with Ricky.  Time will tell whether it was the right choice and if Ricky can bring out some more star power and marketability in her.

BEST PERFORMANCE: 63-year-old Doug Williams — who has previously toured with James Brown, Stevie Wonder and Tina Turner — oozed soul (and shred the bass as well) when he delivered the Luther Vandross styled version of Stephen Still’s Love The One You’re With.  Originally from Chicago, he sided with compatriot Joel and could be a real contender if he manages to showcase his broader skill set.

BEST QUOTE: “The house is yours, the show is yours, the country is yours”. Encouraging words from Joel to Jess Berney, but I think Tony Abbott would have something to say about that last bit.

‘LOVE IS IN THE AIR’: No, Kylie hasn’t got herself a new boyfriend on the set yet.  As with every network during major events broadcasts, Channel Nine like to flog their upcoming programs.  Hence, nearly every ad break has included a promo for Nine’s obligatory hook-up-a-girl-with-a-country-bloke dating show for this year — When Love Comes To Town — which features John Paul Young’s hit as the theme song.  Could JPY be making a 21st century return to the iTunes charts?