What to Watch; Australian Indigenous films at BFI’s Shifting Sands

Australia: Shifting Sands is a BFI retrospective of Australian cinema over the last two decades, tracing the emergence of Indigenous voices and stories captured on the big screen. 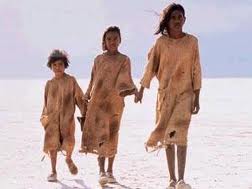 THE Royal Academy’s exhibition Australia marks the first major survey of Australian art in the UK in 50 years. To compliment this, the British Film Institute (BFI) is screening a season of Australian Indigenous cinema.

Here are 6 highlights of the programme.

In Peter Weir’s follow-up to Picnic at Hanging Rock, Richard Chamberlain stars as a Lawyer representing five Aboriginal men accused of murder. As the case develops, he begins to suffer from vivid and disturbing dreams, which appear to tie-in with bizarre meteorological events and connect him to one of the accused — played by David Gulpilil.
21 & 27 September

The Chant of Jimmy Blacksmith

Based on a true story, this was the first Australian film to be accepted in competition at the Cannes Film Festival. Set in the turn-of-the last century outback, it tells the story of Jimmie whose mother was Aborigine and father was white and is brought up by white missionaries. The contradictions of white attitudes towards his mixed race and his marriage to a white woman in order to ‘dilute’ his colour, lead to an uprising of anger that ultimately ends with tragic consequences.
22 September

Tracey Moffat was the first Aboriginal woman to direct a feature film, following a career in photography. BeDevil presents a fascinating triptych of ghost stories, based on tales handed down. It relies on the surrounding landscape and nature to embellish the supernatural air to the film.
24 & 26 September

The true story of three children abandoned by their white fathers, are taken from their Aboriginal mothers — claimed as part of The Stolen Generation. Moved to a state facility for mixed race children, they escape and embark on a 1200 mile journey home. Christopher Doyle’s cinematography accentuates the stark but stunning outback, in a story that will move audiences to tears.
29 & 30 September

Receiving mixed reviews at the box office, Baz Lurhmann’s historical drama epic sets its tale of romance between a visiting English-woman (Nicole Kidman) and an Australian drover (Hugh Jackman) against a backdrop of racial tension. The film is narrated by Nullah (Brandon Walters), a young boy evading the authorities determined to separate him from his Aboriginal mother.
21, 22 & 29 September, & 3 October

A group of aboriginal tribesmen take an annual hunting trip for goose eggs, providing a catalyst for magical stories to be shared between elders and the younger men. This celebration of storytelling is visually poetic, funny and engaging, and is the first ever film entirely filmed in Australian Aboriginal languages.
29 September & 6 October

Australia: Shifting Sands runs from 19 September — 8 October with tickets on sale through the BFI website. For more information see whatson.bfi.org.uk.