Where are the Indigenous Australians on our screens?

In Australian soaps such as Home and Away, Neighbours, Sons and Daughters, The Flying Doctors and Prisoner Aboriginal characters are notable by their absence. 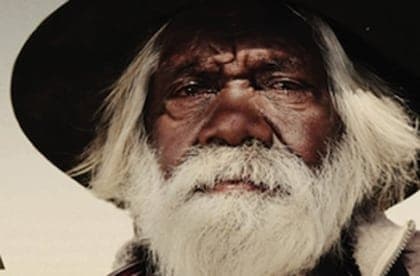 As someone who has taken a keen interest in Australian films and TV series over the years I feel that Indigenous Australians are under-represented in Australian media, as they are in so many other aspects of Aussie life.

One 2006 study found that while no newspaper managers interviewed believed their papers were racist most Aboriginal interviewees believed that mainstream newspapers “failed Aborigines dismally” .

I was in part moved to write this having watched John Pilger’s moving documentary Utopia (image above) which screened in the United Kingdom in December 2013 and was being shown across Australia in January and February this year.

It is incredible that Australia, which has one of the highest standards of living in the world, has treated its indigenous people so badly. According to the Australian Institute of Health and Welfare, the life expectancy of an Aboriginal Australian is around 17 years less than that of a white Australian. According to the Australian Bureau of Statistics, while the native Aboriginal people constitute some 3% of Australia’s population they make up around 25% of the country’s prison population. The documentary reveals that some prisons are to be exclusively for Aborigines. This is quite incredible and reminiscent of the old Apartheid system in South Africa.

I’m writing this from Edinburgh, Scotland where we’ve seen many Australian soaps such as Home and Away, Neighbours, Sons and Daughters, The Flying Doctors and Prisoner: Cell Block H. Aboriginal characters are notable by their absence.

Prisoner ran for 692 episodes from 1979-1986 yet only featured Aboriginal characters for 15 episodes out of the 692 — about 2% of the whole series. Given that Aboriginals make up 25% of the prison population they should have featured in over 170 episodes. Prisoner proved to be a very popular programme with British audiences and has had numerous complete runs on assorted channels along with successful stage versions featuring various original cast members such as Fiona Spence, Maggie Kirkpatrick and Jane Clifton. 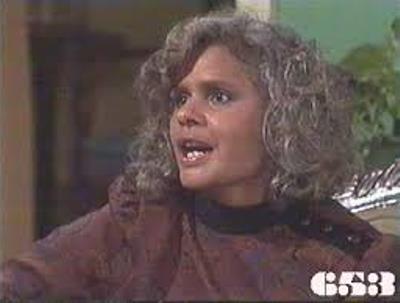 The late Justine Saunders played the part of social worker Pamela Madigan (pictured) for 15 episodes and these largely dealt with her attempts to rehabilitate young tear-away Sarah West (played by Kylie Belling). While the inclusion of the Aboriginal story lines was creditable it was surely little more than tokenism given the enormous run of the series.

Interestingly Justine was awarded the Medal of the Order of Australia (OAM) for her services to the performing arts.  She returned the award in protest at the emotional turmoil her mother was suffering over the Howard government’s denial of the term ‘Stolen Generation’.

In the mid 1970’s, British television showed the Australian detective series Boney based on the books by Arthur Upfield. Boney was a half-Aboriginal detective who tracked murderers by spotting an overturned twig or a crushed ant on the sand. While the series did tend to show Aboriginal characters in a sympathetic light, incredibly the lead player was a white New Zealand actor called James Laurenson who played the part of Boney in black face (pictured below). 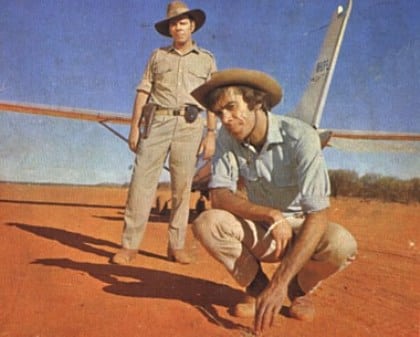 In the 1970’s we didn’t have many Australian programmes on British TV. I can only remember Boney and The Outsiders. The Outsiders starred Scottish actor Andrew Keir and German actor Sascha Hehn. Remarkably for a series that was set in the Australian Outback an Aboriginal actor (David Gulpilil) featured in just one of the 13 episodes. Meanwhile, a German actor was the lead role in all 13 episodes and because of his poor English he had to be dubbed by Aussie actor Andrew Harwood. 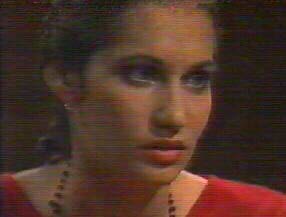 In Ramsey Street where “Everybody needs good neighbours” the under representation of Aborigines has been incredible — as at December 2013 there have been 6,790 episodes. Only three (!) of them featured an Aboriginal character Sally Pritchard (pictured) played by Brenda Webb way back in 1994. Hardly `the perfect blend`. It might also be noted that for a series set in Melbourne, the huge Greek community of that city rarely gets a look in either.

Long running series like the Young Doctors and A Country Practice both ran for over a thousand episodes. I cannot recall any of the dishy young doctors or the nurses in their pink pinnies at the Albert Memorial Hospital being Aboriginal. A Country Practice did feature Aboriginal character Brenda Dwyer (played by Justine Saunders) for the grand total of two episodes out of 1,088.

The 1978 film The Chant of Jimmie Blacksmith starred Tom E. Lewis and was directed by Fred Schepisi, It was well received and won a number of awards.  The 1986 film The Fringe Dwellers, directed by Bruce Beresford, was acclaimed as being the first Australian film featuring indigenous actors in all the major roles, though the film did not do well at the Australian box office.

Notable activist films like The Killing of Angel Street, made in 1981 and directed by Donald Crombie, merely had a few token black extras in the crowd scenes. This was one of two films – the other being Heatwave, produced independently in the same year and directed by Phillip Noyce – made about the Juanita Nielsen affair. Juanita was a green activist whose activities so displeased many powerful people (including a charming gentleman called `Mr Sin`) that she disappeared, presumably murdered, in 1975.

2002’s Rabbit Proof Fence (pictured), also directed by Phillip Noyce, dealt with the case of A.O. Neville who had the Orwellian job description of `Chief Protector of Aborigines`. He presided over the controversial policy of removing Aboriginal children from their parents; children who were later termed the Stolen Generation. More than 25% of Noongah were confiscated in this way and sent to “concentration-like camps” at Mogumber at Moore River and Carrolup near Katanning in Western Australia. 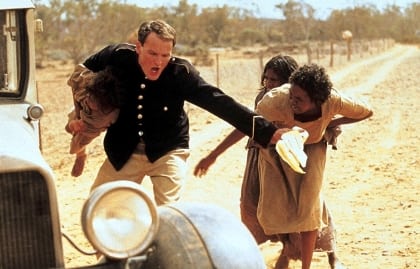 The film won many awards including Best Director at the Film Critics Circle of Australia.

However, Melbourne Herald Sun columnist and conservative Andrew Bolt was most displeased by the film arguing `Rabbit-proof myths`:

Phillip Noyce claims his new film, Rabbit-Proof Fence, is a true story. The Hollywood director’s publicity blurb repeats the boast: “A true story.’’ Even the first spoken words in the hyped film, which opens next week, are: “This is a true story.’’ Wrong. Crucial parts of this “true story’’ about a “stolen generations’’ child called Molly Craig are false or misleading. And shamefully so.

He ends his article with:

The Aboriginal leaders who falsely claim they were “stolen’’, the writers who exaggerate the number of children removed, the silly compensation cases that collapse and the slick claims of genocide all risk making every claim of black suffering seem a cynical try-on. The truth of our past is hard enough to face. Untruths and exaggerations now will only divide us. Your film shames not us, Phillip Noyce, but you.

Australian actor John Howard, star of many Australian soaps such as medical drama All Saints, of course shares the name of the former Australian prime minister. He actually issued an apology to the Aboriginal people in the year of the Sydney Olympics, something his political namesake would not do. The full text of this John Howard’s apology is here.

Home and Away actor Jay Laga’aia (pictured left, below), of Samoan descent, once accused the show of being racist in a bitter Twitter rant:

“As someone who lost his job on H&A because they couldn’t write two ethnics that weren’t together, I’d like the chance to ply my trade.” 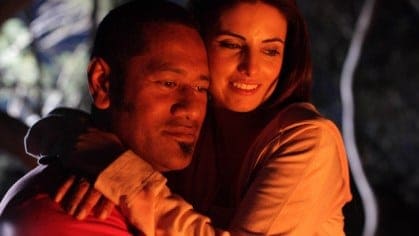 Home and Away strongly denied Jay’s allegations. Although Jay’s name was constantly credited from 2010 — 2012 he only actually appeared in a small minority of those episodes listed.

Joanna Garretto who is a recent Graduate of Swinburne University of Technology in Melbourne, with a Bachelor of Communication (Media Studies), wrote in The Larrikin Post:

The next Aboriginal person you see on TV will likely be presented as part of this stereotypical idea of “Aboriginalism” we currently use to overlook indigenous Australians. By Aboriginalism I mean displaying Aboriginal cultures as being primitive and exotic and having little to do with the modern world. This idea, quite derogatory in nature, is the reason that many Australians perceive Aboriginal people. In combination with the media within Australia, it has shaped the view of Aboriginal people within our society.

John Pilger made a documentary about the ill treatment of Aboriginals in Australia back in 1986. Sadly, in the intervening 28 years till Utopia, little or nothing has changed.

Rhetoric and empty promises are simply not enough. Something must be done to improve the standard of living of a people who have lived in Australia for tens of thousands of years longer than anyone else. Improving the portrayal of Indigenous Australians in the media where they are still so under represented could help their cause; unfortunately even this has proved too problematical over the years.

John Pilger’s Utopia was shown on network British ITV shortly before Christmas 2013 and had its Australian premiere in Redfern, Sydney on Friday 17 January which was attended by some 4,000 people with John Pilger there in person. Utopia was also shown in Melbourne at the Cinema Nova.  It will be broadcast on Australian television by SBS in April. You can read about it on the website www.johnpilger.com