When you wish upon an ARIA

The 2011 ARIAs are in the bag. This year's instalment definitely made up for last year’s disappointing socks and jocks award ceremony. As the winners retreat to their accountants' offices to calculate how many units they'll move tomorrow and the losers retreat to the bar, we take stock of Australian music's night of nights. 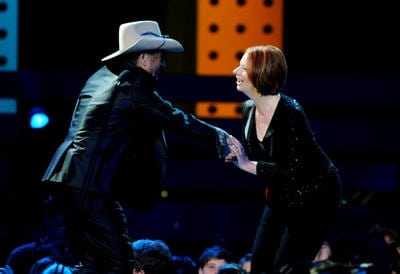 LIKE the eager kid at Christmas we were up early Sunday morning to track the 2011 ARIA awards.

Bouncing downstairs to un-wrap the anticipated gifts we were most impressed to discover a big, shiny fire engine of this year’s music. Which most definitely made up for last year’s disappointing socks and jocks award ceremony.

Between all the tweets, websites and messages back home here’s what we managed to unravel:

The night belonged to Kylie Minogue. When the Prime Minister is prepared to rock up and present you your award you are doing very well. Plus it gives everyone a chance to reflect on how much of a music icon you are.

It’s one of those nights where the likes of Guy Sebastian and the Living End will knock back a schooner together at the bar and realise how much musically they have in common.

True to form the organisers of the ARIAs have paid money to have some B-grade American celebrities turn up. This year it’s the boys from Good Charlotte. Remember them? Us neither, but we’d complain if they didn’t get some washed out, used-to-be-famous people there. We’re putting in a bid for Lindsay Lohan to be front and centre for 2012.

The major awards were divided between Boy and Bear and Gotye.  Can’t complain, both of them put out amazing albums this year.