When 5 become 4: Spice Girls to tour Australia without Posh

2DayFM radio personality Jackie O has “exclusively revealed” that she has it on good authority the Spice Girls would be reforming to tour Australia in 2014. However Victoria “Posh Spice” Beckham’s representation claims that the singer has no intention of joining her former band mates on any projects next year. 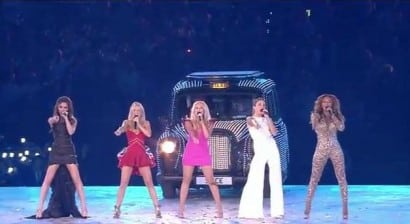 2DayFM radio personality Jackie O has “exclusively revealed” that she has it on good authority the Spice Girls would be reforming to tour Australia in 2014. However Victoria “Posh Spice” Beckham’s representation claims that the singer has no intention of joining her former band mates on any projects next year.

Jackie O, who presents a breakfast show with long-time collaborator Kyle Sandilands, told listeners that she had it on good authority that the iconic 90s pop group would follow up their successful reunion at the 2012 Olympics Closing Ceremony with a tour Down Under.

Jackie said: “This is very much an exclusive announcement that I have heard about. All the Spice Girls will be touring Australia. No official announcement has been made, but I have a source, a very reliable source. I cannot reveal my source, but a very, very good source and yes they’ll be touring next year, here in Australia … including Posh.”

Both Jackie O and her partner Sandilands are close friends with Spice Girl and former The X-Factor Australia judge Mel B, who lived in Sydney until moving to Los Angeles earlier this month to take on a role with Simon Cowell project America’s Got Talent. It is believed that Jackie O received her “exclusive” information either from Mel B or another of their mutual friends.

The Spice Girls were last scheduled to tour Australia in 2008, however cancelled their Australian performances in order to focus on “family and personal commitments”. Their recent reunion at the Olympic Games and the launch of Spice Girls musical Viva Forever sparked fresh rumours of a more permanent collaboration, however there has been no confirmation from the band’s management regarding the Spice Girls’ future.

Despite Jackie O’s claims that Beckham would join the other Spice Girls on the rumoured Australian tour a spokesperson for the singer-turned-fashion designer said that she would not be involved in getting the band back together for any extended period of time.

Beckham’s spokesperson said: “Victoria has no plans to tour with the Spice Girls in 2014. Her future focus concerns her family and fashion business.”

Beckham is often cited as the band member most reluctant to revisit her time in the Spice Girls. She made a pointing of tweeting that she was a pop star “just for the night” at the time of the Spice Girls Olympics performance and was quick to leave the party held for the launch of the band’s musical in London.

British newspaper the Daily Mirror reported only last month that Beckham had been involved in a falling out with Spice Girl Geri Halliwell, the latest in a long series of personal feuds that have prevented the band reforming permanently in the thirteen years since they first split up.

The Spice Girls were a cultural phenomenon in Australia during the late 1990s, with their first two albums achieving six times platinum certification and their debut Spice becoming the top selling album of 1997 with over 19 million copies sold worldwide.

Spice up your morning: