The lights have been switched on for the 18-day Vivid Festival in Sydney. 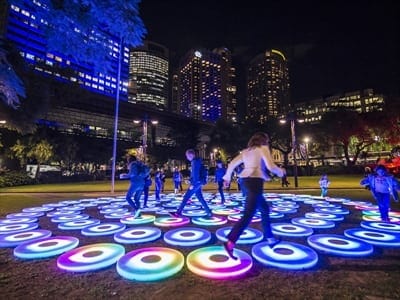 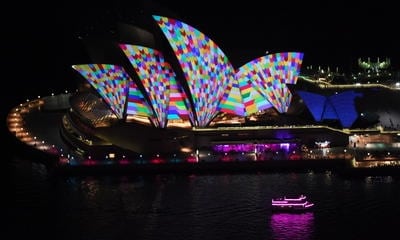 Cars with “feelings”, large inflatable animals and an interactive xylophone are just some of the weird and wonderful light displays at this year’s Vivid festival in Sydney.

Installations around the harbour and throughout the city were officially switched on at 6pm on Friday by Premier Mike Baird, who hopes the 18-day festival helps boost the NSW economy. 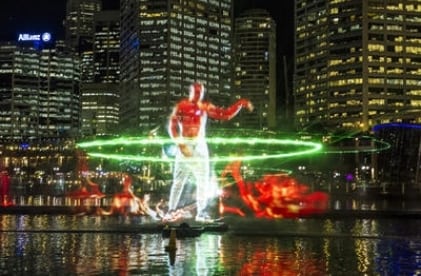 “This event provides a welcome boost to shops, restaurants, cafes and bars during the winter period and I’d encourage everyone to leave the car at home and take advantage of more than 3500 additional public transport services on offer during the festival,” Mr Baird said.

The winter festival began on an unseasonably warm night, with people thronging to the water’s edge.

The company behind the lighting of the Harbour Bridge, 32 Hundred Lighting, held an indigenous smoking ceremony aboard the Tribal Warrior boat to cleanse the harbour. 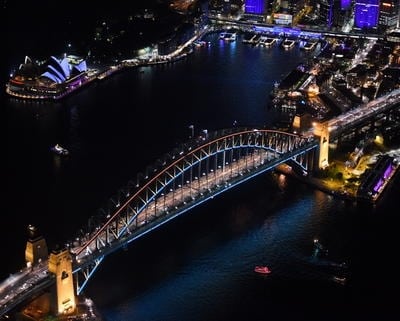 “The lights on the Harbour Bridge are fully interactive, so people can control what colours appear by a panel over at Milsons Point,” general manager Deborah Wrightson said.

The interactive theme is strong throughout this year’s festival.

A stage set up alongside the Museum of Contemporary art encouraged people to try out a foxtrot or tango with the words Strictly Sydney emblazoned behind.

People were encouraged to play a xylophone displaying lights matching their compositions, Toyota Prius cars were lit in an unusual installation to show their “feelings and emotions” and large blow-up animals delighted children. 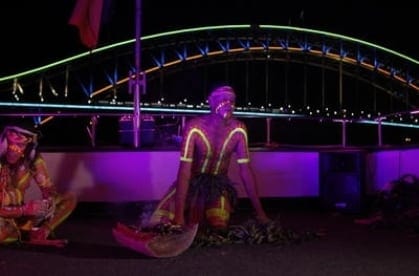 Large videos of dancers from the Bangarra Dance Theatre were projected on the sides of the Harbour Bridge and the Opera House – the centre piece of proceedings.

A large section of crowd stood with cameras and phones aloft as its sails changed from psychedelic butterflies to snakeskin in a kaleidoscope of colourful patterns.

The festival extends to different areas of the city, keen to get in on the show.

This year’s festival has been expanded to five new precincts, including Martin Place, the Carriageworks, the University of Sydney, The Star and Sydney Harbour,” said NSW Deputy Premier and Minister for Tourism & Major Events Andrew Stoner.