Up on high | High Tea at the Paramount

At Paramount, the term High Tea is applied literally, as a lavish afternoon spread is enjoyed with 360 degree views of London. 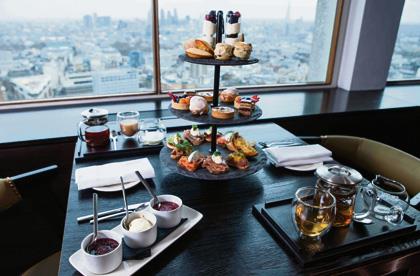 THE tradition of enjoying a lavish afternoon tea — known as ‘high tea’ – has been a staple of British life for centuries. Never before has the term been applied as literally as it is at Paramount, a restaurant and bar nestled thirty-two floors above London with 360 degree views of everything that the capital has to offer.

Despite its location in the Centre Point high-rise on bustling New Oxford Street, a visit to Paramount is like ascending to a peaceful sanctuary allowing patrons to escape the tumult of the city below. This is not an ‘eat and go’ experience: Paramount has been specially crafted by designer Tom Dixon to encourage diners to wind down and enjoy a relaxing, all-afternoon affair.

For the uninitiated Australian, going for high tea is an extremely foreign affair. The combination of sweet and savoury delights can be somewhat overwhelming, and the canapé-style food can seem somewhat daunting. If that is the case, you have nothing to fear at Paramount: the menu designed by new head chef Mark Kay incorporates complex flavours into bite-sized morsels that will leave you begging for more.

Australian Mark Kay, formerly of Chez Bruce and Wild Honey, has brought an eclectic range of options to Paramount while still managing to adhere to the traditional archetype of what high tea should be. On offer are a variety of gourmet sandwiches diverse enough to satisfy the peculiarities of anybody’s tastes: ocean-fresh smoked salmon and fromage blanc on rye pumpernickel is partnered with perfectly poached chicken with spring onion mayonnaise on multigrain.

The presentation of these sandwiches may provide confusion to high tea first-timers, who will inevitably wonder where the traditional ham and cucumber offerings are hiding. Taking a chance on Mark Kay’s menu is rewarding, however, with the expertly crafted flavours of each sandwich combining to transform the traditional sandwich into a culinary experience.

The Paramount high tea menu also includes a quiche of the day alongside a range of deserts and just-out-of-the-oven scones. The theme that underpins each aspect of the high tea is freshness: everything from the sandwiches to the scones are bursting with unmistakably crisp flavours.

It would, of course, not be high tea without a beverage on offer. Paramount offers an extensive range of tea and coffee including Jasmine Pearls — hand-rolled and scented with fresh jasmine flowers – and Organic Bohea Lapsang — which has a distinctive smoky, liquorish-tinged flavour. It is not just tea and coffee that is on offer at Paramount, however: for an additional cost, you can toast to being on top of the world (or London, at least) with a glass of champagne.

For many Australians, experiencing high tea is on a must-do list of things to do while in London. While there are a multitude of options across the city, there are none that incorporate the sky-high views and luxurious atmosphere of Paramount. Rise above the city and take a few hours to treat yourself to an experience you will never forget.

High Tea is served from 3pm to 6pm daily.