Artworks depicting a kangaroo and dingo are the subject of a British government export ban, delaying their Australian purchase. 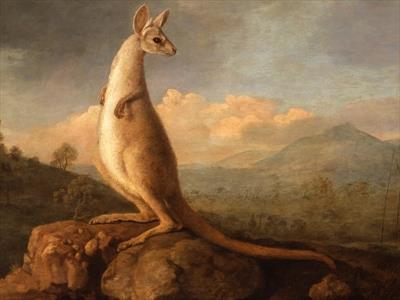 THE curious tale of a dingo and kangaroo has seen British authorities stake a claim over the native Australians.

The UK government has imposed a temporary export ban on two artworks – dating back to the 1770s – depicting the animals and believed to be the British public’s first glimpse of the new land, Australia.

The work of renowned British artist George Stubbs, The Kongouro from New Holland (The Kangaroo) and Portrait of a Large Dog (The Dingo), were first exhibited at London’s Royal Academy in 1773.

Stubbs worked from sketches and verbal accounts to create the pieces, including a dingo which is fox-like in appearance.

In the case of the kangaroo, he was aided by a three-dimensional model, achieved by inflating a preserved skin.

The works are believed to have been commissioned by Joseph Banks immediately after taking part in Captain James Cook’s first Pacific voyage.

They have remained in private ownership with the extended Banks family ever since.

However a proposed sale of both artworks and a subsequent relocation to Australia has aroused objection from British authorities.

“It would be a terrible shame if the UK were to lose these extraordinary paintings to an overseas buyer,” said Lord Inglewood, chairman of the Reviewing Committee on the Export of Works of Art.

“They were the British public’s first introduction to these exotic animals from the Australasian New World which was opening up at that time.”

The committee argued that the paintings are “so closely connected with our national life that their departure would be a misfortune”, and that they were “of outstanding significance for the study of eighteenth century exploration of Australia and the public dissemination of knowledge during the Enlightenment”.

Acting on the committee’s recommendations, Culture Minister Ed Vaizey has imposed the temporary export bar, hoping to raise the estimated STG5.5 million ($A8.37 million) needed to buy the works and keep them in the UK.

An August 5 deadline has been set to find the funds, when the export licence application will be reconsidered.

Details of the proposed Australian buyer have not been revealed. – AAP