REVIEW | Melbourne born opera director revitalises Tosca, a dramatic tale of love and murder in Italy on stage at the Royal Opera House. The production also features Australian tenor Hubert Frances in the role of Spoletta. 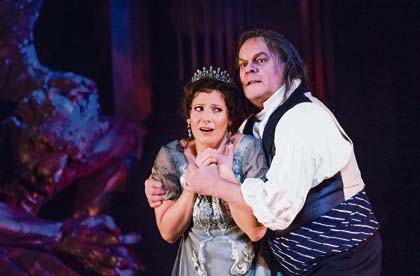 MELBOURNE-born opera director Andrew Sinclair is behind the current production of Tosca, a dramatic tale of love and murder in Italy on stage at the Royal Opera House (ROH).

Sinclair, staff director at the ROH, has directed opera productions across Australia and in major theatres from New York to Moscow and everywhere in between. In various interviews, Sinclair makes it clear his philosophy to opera directing is that directors exist to serve the music, not vice-versa.

In this year’s Tosca, the popular opera by Giacomo Puccini, Sinclair revives the production by British director Jonathan Kent. Kent’s 2006 operatic staging is powerful and intense: daunting statutes of saints, angel wings and religious paraphernalia dominate the stage, crowding out the singers and creating a climate of claustrophobia.

Tosca’s Eternal City of the early 19th century was even more unstable than post-election Rome in 2013. Against the backdrop of years of war and strife, Tosca and her lover Cavaradossi, fight against a licentious and cruel police chief, Scarpia. Scarpia wants Tosca for himself and will destroy Cavaradossi to do it.

Fortunately for the dramatic arc of the opera, Scarpia succeeds; all main characters are dead by the final curtain. Act I takes a little to get going and it is not until the real villainy of Scarpia in Act II emerges that the musical and theatrical performances become truly convincing.

Act II, set in one darkly wood-panelled room of the police chief’s palace, is the dramatic highlight of the evening. It provided a perfect mix of tender singing, frenetic pacing and murderous stabbing, culminating with Tosca leaning into Scarpia’s abdomen with a kitchen knife.

While Sinclair pulls the strings behind the scenes, on stage is another Australian – tenor Hubert Francis. A former Young Artist at the Royal Opera House, Francis plays Spoletta, a wiry goon doing the bloody bidding of the opera’s villain, Scarpia.

With at least one knockout aria in each act, Tosca always attracts crowds and applause. The South African soprano Amanda Echalaz is excellent, especially as she listens powerlessly to the torture of her lover, Cavaradossi, and then fends off Scarpia’s advances. But German baritone Michael Volle as Scarpia was the strongest performer of the night, showing again how the villains get all the fun.