Tina, in the Green Dress at The Roundhouse

REVIEW | Tina, In The Green Dress is the ambitious collaboration between emerging electro-pop group A History and theatre company TwistedHip. The interactive show tells the story of Tina, an American girl who is estranged from her lover Jimmy when he is drafted to Vietnam.

by Jennifer Perkin
in Lifestyle 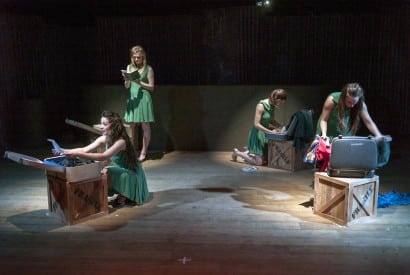 IS IT a gig? Is it theatre?  No one is entirely sure what to expect ahead of the performance of Tina, in the Green Dress at the Roundhouse. One thing’s certain however – they don’t waste any time. As soon as I hand over my ticket a lady in military fatigues barks at me to get in a queue. Before I can even think about a cloakroom I’ve been ordered to put on a set of headphones and pushed forward into a dark room as the sound of choppers surround me.

And so begins the journey.

Tina, In The Green Dress is the ambitious collaboration between emerging electro-pop group A History and theatre company TwistedHip. The interactive show tells the story of Tina, an American girl who is estranged from her lover Jimmy when he is drafted to Vietnam. It is based on a suitcase of real letters sent between the couple, which the band found at a market in Coney Island.

The journey sees Tina travel from to Mississippi to New York, but tonight we start firmly in Vietnam. There are soldiers everywhere and we are ushered through a bewildering maze of dark alleys – someone hands me a sandbag that I am to carry and deliver to a waiting soldier. There are snippets of action happening all around, heated exchanges and illicit encounters involving soldiers – and then Tina appears in the middle of the room for a dramatic choreographed crescendo as the music floods my head.

It’s an incredibly immersive experience, and I’ve lost myself so completely by now that I’m oblivious to the other equally engrossed audience members.

We are transported to a New York club for the second phase of the production, where A History are performing in a sleazy club with Tina in her green dress at the microphone. The band perform several songs as the dancers bump and grind, and the audience relaxes in the more familiar gig environment.

The band are hot; dark beats laced with shimmering glints of melody are a backdrop for magnetic singer Aquila Rose to mewl and growl and coo – the Aussie/English/Spanish three piece are nothing if not sexy.

Things get funky during the infectious ‘Boom Down’ as the dancers get hot and heavy, and drop down a notch for the moody ‘Howling’, which has echoes of Fever Ray. Single ‘Fox’ is their real diamond however, sneaking up on you with its hypnotic circuital guitar melody and gentle build up. It’s the kind of song you only need to hear once before you’ve got it stuck in your head.

We emerge from the vintage Big Apple to present day Big Smoke thoroughly impressed, and slightly confused. Still not exactly sure what it was, but we definitely want more.