Tim Minchin’s Matilda the Musical failed to pick up the top Tony Awards on Sunday, with Cyndi Lauper’s Kinky Boots strutting off with the big gongs. 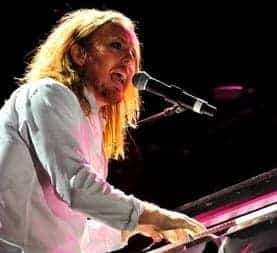 AUSTRALIAN Tim Minchin has missed out on a Tony Award for Best Original Score for Matilda the Musical, won by Cyndi Lauper for her runaway Broadway sensation Kinky Boots.

Lauper and Harvey Fierstein have given Kinky Boots – originally a 2005 film about a failing shoe factory that turns to making drag queen boots – a fun score and a touching book that celebrates diversity.

In her acceptance speech, the pop singer/songwriter thanked her mother for teaching her how to sing, New York City for welcoming her, and her husband and son for inspiring her.

Minchin, 37, penned the score and lyrics to Matilda, a witty, dark musical adaptation of the novel by Roald Dahl that is still running in London.

Its leading woman is actually a man – Bertie Carver, who plays the evil headmistress Miss Trunchbull.

Kinky Boots and Matilda the Musical are also the front-runners for top musical.

But Minchin has chosen not to fly to New York for the awards ceremony, opting instead to stay in Sydney to perform in the latest incarnation of Andrew Lloyd Webber’s musical Jesus Christ Superstar.

Matilda has already enjoyed some success at the awards, with Gabriel Ebert winning Best Featured Actor in a Musical for his role in the play.

Other early Tony Awards went to Courtney B Vance and Judith Light.

Vance won for best featured actor in a play for portraying a newspaper editor opposite Tom Hanks in Lucky Guy. He dedicated his award to his mother.

Light won her second Tony in two years, cementing the former TV star of One Life to Live and Who’s the Boss? as a Broadway star.

She followed up her win in 2012 as a wise-cracking alcoholic aunt in Other Desert Cities with the role of a wry mother in The Assembled Parties, in which she goes from about 53 to 73 over the play’s two acts.

Frontrunners for best play are Vanya and Sonia and Masha and Spike and The Assembled Parties.

The Tonys are being broadcast live by CBS from Radio City Music Hall. Neil Patrick Harris is back for his fourth turn as MC and leads a show featuring talented children and pulse-pounding musical numbers. – AAP