Australian Clare Stewart reinvigorates BFI London Film Festival 2012 with an expansion of venues and a unique programme. With a number of Australian films on the bill, including The Sapphires and Wish You Were Here, get in quick to buy newly released tickets and support Aussie cinema. 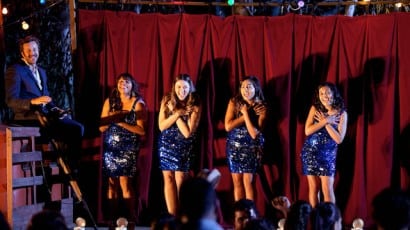 For those Aussies who miss their Flickerfest, their MIFF (that’s Melbourne International Film Festival for those not in the know), their Tropfest or their Breath of Fresh Air (for the Tasmanian readers out there), the 56th annual London Film Festival may just be the answer.

Set to run from 10-21 October 2012, it will be doing so under the practised hand of Australian Clare Stewart. Appointed this year as BFI’s Head of Exhibition and Festival Director after five years heading up the Sydney Film Festival, Stewart is set to inject a new look and style into the proceedings. With several changes to the usual format, the Festival will be hoping to appeal to a broader audience with a reinvigoration in venues, programme and target audience.

Taking place over 12 days, the Festival will feature in a number of cinemas across the city, expanding from its traditional home in the Leicester Square and BFI Southbank to include some newcomers — Hackney Picturehouse, Renoir and Everyman Screen on the Green featuring amongst the chosen locations.

Bringing a rich and diverse programme of international films and events to cinema hungry Londoners, the Festival will screen a total of 225 fiction and documentary features. This will include 12 World Premiers, 12 International Premiers and 35 European Premiers.

Although cinema is the focus, the programme also features plenty of off-screen events to keep attendees entertained. Screen Talks on offer include the author Salman Rushdie in discussion about the adaptation of his own novel Midnight’s Children into film, screening in Official Competition. Masterclass events feature leading film practitioners delivering insights into the industry of film to audience members.

For those finding it difficult to sift through the array of offerings to focus in on their genre of choice, the structure of the programme is focused around themes of Love, Debate, Dare, Laugh, Thrill, Cult, Journey, Sonic and Family. The full program is available here.

Australia is showcased in more ways than just the overall creative direction of the Festival, with a number of Australian short films and feature films making the cut. Dead Europe is a meditative interpretation of Christos Tsiolkas’s acclaimed novel of the same name about a young man who travels to Greece to scatter his father’s ashes. Addressing disparate themes of religion, sexuality and politics in surprising and compelling ways, it is showing at Curzon Mayfair, Hackney Picturehouse and Vue, Screen 5.

Wish You Were Here, starring Joel Edgerton and Teresa Palmer, is a haunting and atmospheric film that explores the aftermath of one man’s disappearance on a holiday in Cambodia through the eyes of his Sydney family and friends left seeking to understand what has happened to him. Developed through flashbacks, the story slowly reveals itself as the tension builds. This is a must see and is showing at Screen on the Green and Vue, Screen 5.

An excellent counter to the brooding nature of Wish You Were Here, is found in the dynamic and infectious film The Sapphires. Recommended by Clare Stewart herself, this film features Chris O’Dowd (of IT Crowd fame) as a down-on-his-luck ‘soul brother’ who discovers a singing sensation in three Aboriginal sisters in a country pub talent contest.

Based on a true story, it follows the three girls — played by Deborah Mailman, Miranda Tapsell and Jessica Mauboy — as they are remodelled by their manager and sent off to Vietnam to perform for the troops. Stewart calls it “delightful, humorous and pulsating with great 60s soul music,” and can be seen at OWE, Screen 2 and Hackney Picturehouse.

With a fresh lot of tickets released only today — get in quick to guarantee your seat.