FROM THE VAULT: Our resident vintage TV junkie remembers the fun, romance and medical malpractice of the original Aussie hospital soap, The Young Doctors.

Many Australians will have been brought up with medical dramas like `All Saints` which featured Judith McGrath, John Howard (no, not the former Australian PM!) and Elizabeth Alexander. `All Saints` was set in the fictional All Saints Western General Hospital and ran for 11 and a half years from February 1998 to October 2009. It was nominated for 56 Logie awards and won nine.

You may also remember `A Country Practice` which ran for over a thousand episodes from 1981-1993. Set in the fictional rural country town of Wandin Valley, it starred Shane Porteous, Brian Wenzel and Lorrae Desmond. It won a record 29 Logie awards during its twelve years of production.

Before that however there was a hospital that was incredibly entertaining to watch but one you definitely wouldn’t want to go in to as a patient! That hospital was the Albert Memorial and the series was `The Young Doctors`. 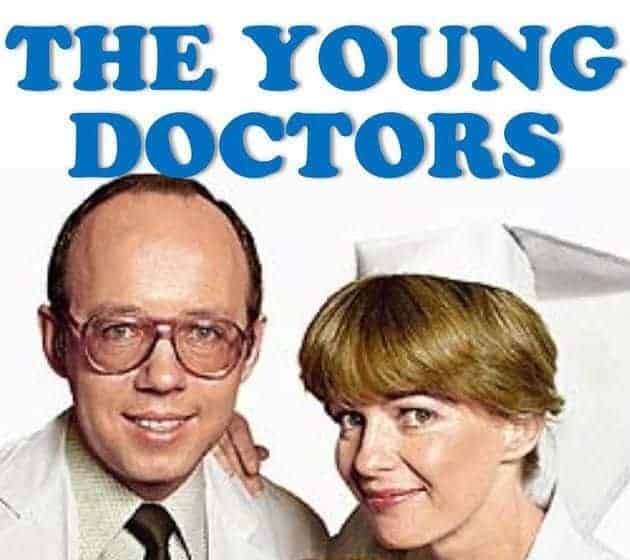 `The Young Doctors` was Reg Grundy’s first really big hit, with its stories about romances among the staff of the fictitious Albert Memorial. It became the first Australian serial to be sold internationally. Despite running for an astounding 1,396 episodes, which was then a record (since overtaken by `Home and Away` and `Neighbours`), it never won an award of any sort.

It was popular in its day and its demise was greeted with dismay by its many fans.  So, what was its appeal?

English born Cornelia Frances played the part of stern Sister Grace Scott. Her character’s martinet attitude made her enemies who poisoned her, assaulted her, raped her three times and stood her up at the altar. In the end the strict sister came to a horrible end by falling down a lift shaft.

When asked by an interviewer “If I was admitted in to the Albert Memorial, would I have made it out alive?” Cornelia replied with a straight face, “No, you’d die.”

In the interview, she jokingly said that she didn’t know how any patient could have walked out of the Albert Memorial living as the hospital was so inefficient with X-rays constantly getting mixed up and so on. Some comediennes used to comment on the Albert Memorial as being the world’s smallest hospital – there was only one bed and they were always making it in every scene.

The show was undoubtedly low budget fare that was constantly mauled by the critics, but loved by the viewers. In Britain it spawned `The Young Doctors Appreciation Society`.

There were more romances than medical scenes with many a famous wedding spectacle, the most famous of which was between Spanish hunk Dr Tony Garcia and sugary sweet nurse Tania Livingston. Sadly, the Spanish born actor who played Dr Garcia, Tony Alvarez, died from cancer at just 40 in 1997. Weddings could also be literally the kiss of death for a character. A gunman opened fire at nurse Julie Holland’s (Lisa Aldenhoven who also appeared in `Prisoner`) wedding, while Liz Kennedy (Rebecca Gilling who also appeared in `Return to Eden`) was electrocuted by a faulty lamp after returning from hers.

Two famous Kiwi actors of the future appeared in the series. One was a thirteen year-old Russell Crowe who had a small part in a 1977 episode. The other New Zealander was big Alan Dale who played the nasty Dr John Forrest from 1979-1982.

Diana McLean played Sister Vivienne Jeffries, a lady who always seemed to find herself attracted to the wrong type of man including Ian Parrish (Serge Lazareff) who turned out to be an impostor posing as a qualified doctor; she was badly assaulted by a crazed hospital security guard and started having gruesome premonitions following a blow to the head.

Speaking from her dressing room at The Ensemble Theatre in Sydney where she was appearing in the play `Other Desert Cities` opposite Ken Shorter in 2014, Diana said: “I am very flattered that we still have so many people who are interested in our show `The Young Doctors` after so many years. I look forward to the launch of the entire series on DVD.”

After Sister Vivienne Jeffries, Diana went on to appear in `Neighbours` as Bess O’Brien in 1999 and had guest appearances in `Water Rats` (2001) and `All Saints` (2002). This year she completed an arduous tour of Australia in a production of the play `4,000 Miles` travelling as far as Darwin in the Northern Territory and going on a helicopter flight over Ayres Rock on the way.

Actress/Comedienne Judy McBurney who played nurse and then sister Tanya Livingston has a horror of needles and was trained to push her needle in to oranges. When she had to inject a patient she used to close her eyes and push the needle in to the mattress beneath the patient.  She was told to keep her eyes open but invariably squinted as she attempted to give the illusion of piercing the convalescent. While never actually stabbing anyone she said: “I think there were a few near misses.”

Judy also remarked that there was no glass in the cupboards and she would sometimes forget this and put her hand straight in to get a thermometer or some other medical appliance, which must have looked very comical.

Happily, there were no mishaps with the syringes while everything else seemed to go wrong. The pace of shooting around four episodes every week for 7 years was phenomenal, which meant that there was no time for retakes – everything had to be done in one shot. If someone fluffed their lines there was no stopping and the actor had to improvise and finish the scene. Many of the cast said it was good training for the theatre.

The series sold well abroad and was acquired by 13 of the 14 weekday members of the ITV (Independent Television) network with the exception of STV (Scottish Television).

In Spain it was named ‘Los Jovenes Doctores’ which had a brief stint on TVE1 shortly after the launch of morning television in Spain.

In France it came under the title of `Jeunes Docteurs Pour La Vie` (Young Doctors for Life), aired on France second national-wide channel Antenne 2 at 08:30 am, from 21 March 1986 until February 1988.

The series was also broadcast in Trinidad, Barbados, Angola, the Netherlands and Canada.

After the show ended in 1983 there was a campaign to have the series released on DVD. It was backed up by many of the stars including Susanne Stuart. Susanne had been a real life nursing sister before joining the cast of the show as Sister Susanne Gibbs. She was always on hand to make sure that any medical procedures were carried out correctly and said: “Living in Thailand I meet many people travelling who remember ‘Young Doctors’ from the old days! They have said what fun it would be to see it again and introduce it to the younger generation. Please support our drive to have it released on DVD.”

Although the series finished some three decades ago it is still fondly remembered by many and some of the cast are still going strong.  Rebecca Gilling went on star in `Return to Eden` and to become the spokesperson for the Australian not-for-profit environmental organisation, Planet Ark. Chris King who played orderly Dennis Jamison now runs his own talent school.  Carole Skinner who played Dr Judith Napier went from `The Young Doctors` to `The Flying Doctors` and then to `Prisoner` and `Home and Away`.

Most remarkable perhaps is New Zealand born Alan Dale who after Dr John Forrest and Hollywood is now in `Secret City`; a TV mini-series of 6 episodes set in Canberra where he plays Australian Prime Minister Martin Toohey.