The Wiggles farewell the UK in style

If 21 years ago The Wiggles had any idea they would still be performing to pre-schoolers around the world today a few things may have been done differently, according to Red Wiggle Murray Cook. There may have been a female Wiggle and Murray may have chosen a different colour skivvy.

by Mihal Greener
in Lifestyle 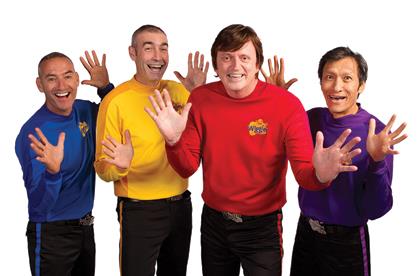 IF 21 years ago The Wiggles had any idea they would still be performing to pre-schoolers around the world today a few things may have been done differently, according to Red Wiggle Murray Cook. There may have been a female Wiggle and Murray may have chosen a different colour skivvy.

Yet when Blue Wiggle Anthony Field assembled the group while studying Early Childhood Education to record a one-off album in 1991, there was little inkling of the global success and longevity that was to follow.

After two decades and over 6000 live shows, three of the four original Wiggles are retiring from the stage and moving into behind the scenes roles. However, before hanging up their skivvies and saying goodbye to the Big Red Car, the original Wiggles are embarking on a farewell tour across theUK and Ireland from 31 May until 17 June. They will then take the tour to the USA, New Zealand and Canada before performing together for the last time in Australia at the end of the year.

Blue Wiggle Field, who Cook describes as the creative driver of The Wiggles, will continue to perform and mentor the new generation of Wiggles: Emma Watkins (yellow), Lachlan Gillespie (purple) and Simon Pryce, who will be taking over Cook’s red skivvy. The introduction of the first female Wiggle (with the exception of Kylie Minogue who was made an honorary Pink Wiggle in 2009) has generated considerable interest. While selecting Emma for the yellow skivvy was not tokenism says Cook, he acknowledges that if The Wiggles had started differently there may have been a female Wiggle from the beginning.

“We just started as a bunch of friends who did a one-off album,” reflects Cook. “If we had known we would be going for 20 years we probably would have had a girl. I think it’s good to reflect how society is, men and women working together.”

Saying goodbye to performing with The Wiggles after two decades is bittersweet for the Red Wiggle. After 21 years together, Cook says his friendship with the other Wiggles is still strong. “I don’t think you can do what we do without getting along,” Cook says. “It’s been an amazing adventure, something we didn’t think would be taken as far as it’s been.”

The decision to retire had been on Cook’s mind for the last few years, and with Yellow Wiggle Greg Page returning to the group six months ago after a five year break due to health issues, and Purple Wiggle Jeff Fatt, who is turning 60 next year, also talking about retirement, Cook says it made sense to do it together, making a clean break and new start for The Wiggles.

Retiring from performing with The Wiggles will be a big change of pace for Cook, who while entertaining children on stage has missed seeing his own children growing up.

“When we tour, we tour a lot,” explains Cook. “Many of the big rock bands will tour for a couple of years and then take three or fours years off, we’ve pretty much toured constantly for 20 years.” Yet while the Red Wiggle is looking forward to spending time at home he will miss being on stage and bringing joy to pre-schoolers across the world.

Being the Red Wiggle is an exaggerated extension of Cook’s own personality, rather than a character on stage.

“It’s kind of the way you are with your own children…you do kind of behave in crazy ways that you wouldn’t with adult friends.”

Off stage his son was especially obsessed with The Wiggles when he was younger, but at 15 years old he is now not quite as enamoured by it as he once was.

“Most 15 year old boys are pretty embarrassed by their parents, I’ve kind of got an extra level,” chuckles Cook.

Despite having sold 23 million DVDs and seven million CDs worldwide Cook remains down to earth and self-deprecating. He laughs off the fact he was named Australia’s sixth best guitarist in 2008.

“I think there was a bit of humour involved in that one.”  While Cook, who owns a collection of 30 vintage guitars and includes The Beatles, The Rolling Stones and The Who as his musical inspirations, says it was it was flattering to be included in that group he modestly adds: “I wouldn’t want to have a play off with some of the other guitarists in that list.”

Beyond working for the Wiggles behind the scenes Cook is open to what the future will bring, but it’s unlikely you’ll spot him in a red skivvy again.

“I don’t tend to like red as a colour,” Cook admits. “When we started wearing the colours I already had a red shirt and Jeff had a purple one and the other two fought it out over who would be blue and yellow.” There was little then to suggest that he’d be wearing red for two decades to follow, in one of the most successful performing acts the world had ever known.