The VoiceBox | Week 6: Showdowns, the demise of ‘Voice Lady’ and finally… some standouts! The Voice Australia: Joel is keeping his faith in Frank to rock the live shows.

Thought you’d seen enough of these ‘Battles’ in The Voice Australia this year, and would really prefer them to just get on with the live shows?

Well, guess what – Channel Nine and Shine Australia disagree with you — and this week we kicked off another round of inter-team musical fights dubbed ‘The Showdowns’. Designed to pad out the process for the judges as they cut their teams by more than half (from 9 to 4), basically this round is similar to the ‘Battles’ — except there’s three contestants in each ‘Showdown’.

And this time they all sing an individual song – which means no duets (thank Christ) but no guarantee of not destroying the song either (sorry, ears).  And after each ‘Showdown’ — one singer goes straight through to the live shows, another gets a second chance to warble in the ‘Sing-Offs’ — and the other one is sent packing.

As I’ve mentioned a couple of times, up until now there hasn’t really been a standout contestant who looks like they could run away with the competition.  If there was, it would save us a lot of time and energy watching some wannabes do their thing (and those ongoing irritating word-for-word Qantas ads and promos for Channel Nine programs). But if there’s one good thing to come out of the first half of the ‘Showdowns’ this week  — it’s finally showcased a few artists who are definitely head and shoulders above the rest.

In Team Will, Anja Nissen — the dirtbike-riding teenager from the Blue Mountains — signalled her arrival as a title threat with a pitch-perfect rendition of Lauren Hill’s His Eye On The Sparrows.

She trounced Jacob Lee and Louise Van Veenendaal — aka ‘Voice Lady’ — who were left fighting for a second chance.  Jacob surprisingly got the reprieve for his so-so version of One Direction’s Story Of My Life – sending Louise home after her diva-esque take on I Got The Music In Me.  In an effort to comfort her, Will said he and mentor/bandmate apl.de.ap will go see her play live any time they’re in the same city as her.  Yeah, let’s see how he goes living up to that promise.

Also wiping the floor with his competition was Team Joel rocker Frank Lakoudis — who made up for his bland cover of Red Hot Chili Peppers’ Under The Bridge in the Battles with a blazin’ rendition of Bon Jovi’s Keep The Faith (see what happens when the artists pick their own songs?)  And Team Ricky’s C Major showed his flair with his winning cover of Robin Thicke’s Blurred Lines, despite a pretty lame arrangement.

While these artists stamped their authority on the competition – along with ‘Voice Lady’, a few other previously memorable contestants ended up on the scrapheap.  Despite getting the name of one of his mentor’s songs inked on his neck (ultimate grab for brownie points), Team Ricky’s tattooed Tassie boy Matthew Garwood ain’t Livin La Vida Loca any longer — losing out to C Major and Thando Sikwila with another dreary Il Divo cover.

And mohawked-Minister’s Daughter Jess Berney’s foray away from opera failed, with her clearly uncomfortable cover of Mariah Carey’s Anytime You Need A Friend sending her crashing out of the competition.  To her credit though, she took it pretty well, remarking that she “just wasn’t what they (the judges) were looking for and that’s fine.”

Finally, Team Kylie’s Candice Skonnermand and new recruit Jhoanna Aguila saw their quests end after some questionable decisions by Ms Minogue.  Candice’s rendition of Unconditionally by Katy Perry was pretty spot-on, however she was overlooked for some soul and swagger from Lionel Cole, and an unexpectedly raw and very impressive cover of Death Cab For Cutie’s I Will Follow You Into The Dark by John Lingard, who headed straight through to the live shows.

Meanwhile, Jhoanna’s not-too-shabby take on Alicia Keys’ Fallin’ was overlooked for quiet Robbie Balmer’s so-so cover of John Farnham’s classic Burn For You, as he got another chance by heading into the sing-offs.

They were both snubbed in favour of the growingly quirky and annoying Kat Jade, who progressed into the live shows.  Looking more like a children’s entertainer than a credible pop star in the making, Cat bounced around with her matching black-and-yellow coloured skirt and cat ears to the equally-as-cheesy Still Into You by Paramore. 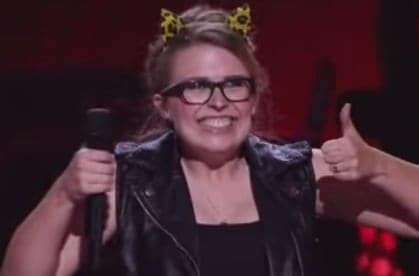 The Voice Australia: Well, at least Kylie is still into Kat Jade. Oh, crap … we kinda might be too.

Kylie obviously doesn’t mind putting up with her snorts and her oh-so-gay BFF — and as a result, we’ve got her on our screens for the next couple of weeks at least.  Good luck to those reps at Universal if she somehow wins — you’ll have a great time trying to market her to anyone except the tween and alternative-and-I-love-it demographics.

BEST PERFORMANCE: Well, I’ve already mentioned how good Anja, Frank and John were. But if I had to pick something else — then Gabriel and Cecelia (aka the producers’ attempt at an Angus and Julia Stone clone) did a pretty good job in totally stripping back and re-working David Guetta and Sia’s dance anthem Titanium.  Despite a few kinda-annoying high notes in the chorus, Ricky took them straight through to the live shows.

WARDROBE ALERT: If Kat Jade’s matching ears and skirt set or Jess Berney’s tiger/leopard/some sort of roadkill jacket didn’t see the alarm off — then Will.I.Am’s giant paperclip across his shirt would have well and truly had wardrobe lovers wondering where the heck the fashion police are on set.

’20 CENT FINE FOR SCRUFFY CORNERS’: That’s exactly what we’ve seen Voice host-turned-actor Darren McMullen utter god-knows-how-many-times in his new role as a librarian on Nine’s drama House Husbands.  If you thought the When Love Comes To Town promos were repetitive, then these were verging on the ridiculous. And to make it worse, they had to get Justice Crew’s current no.1 hit Que Sera to soundtrack the ads — even though we’d already had it drilled into us from the finale of My Kitchen Rules.  Make it stop!