The Voice Australia: Get the hell on with it!

The VoiceBox | Week 9: Singing from the sky, some horrible scheduling and one minute to save your fave. 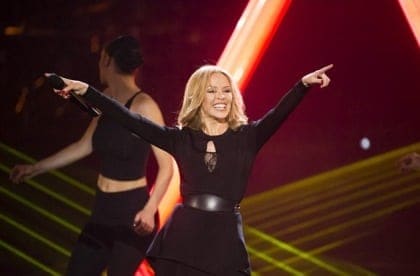 The Voice Australia: Kylie – still sexy and we still love her.

I’d love to have a chat with whoever puts together the scheduling of the acts on The Voice Australia.

Why? Because their utterly ridiculous planning resulted in the most drawn-out episode of the competition yet — and left probably quite a few people either asleep in their chairs or uttering: “Get the hell on with it!”  There are some hardcore Footy Classified fans still waiting for their show to start at 10pm, ya know!

Anyway,  this week we had another guest performance to kick off the show and after snaring Coldplay last week the producers probably decided to cut costs and keep it in-house, sending Kylie up to sing her new single Sexy Love . She even took a tip from Coldplay and decided to get heaps of confetti (in the shape of love hearts) to rain down on everyone at the end. Oh, and sounding half-American at various stages, she took the opportunity to announce an Australian tour next year as well. You can’t say the producers aren’t looking after her.

This week we also started eliminating contestants, with one member of each team getting sent home. You would have thought we’d be put out of our misery early in the show so we could get the results and then see each of this week’s performances from those who are left.

No dice. In a super irritating move, all the performances were once again broken down into blocks for each team.  And we got some freakin’ bizarre scheduling which made as much sense as some of will.i.am’s one-liners (aka, not at all).

Firstly, we heard from the contestant who had been saved by their coach last week. Then we had the three other team members come out to hear the results of the poll. Whoever won was shoved to one side, so we had the two remaining team members with the least votes left.

They then performed their songs, and in a ‘world first’ — or just a blatant excuse for everyone at home to use up more data and download The Voice’s ‘Homecoach’ app — everyone had just one minute to vote for their favourite contestant to save them from facing the boot. You would have been spewing if you weren’t home to watch due to other commitments.

Then we found out the result and said goodbye to one of the acts. And to finish off, that person who won the original public vote throughout the week finally came back and did their performance… if anyone was still interested in watching them. Talk about an anti-climactic, catastroph*k of a schedule!

Anyway, I managed to survive another not-so-live episode of The Voice (well, it certainly looked that way in that weird filming style on the TV) — and this is what was served up:

Johnny Rollins was once again behind his drum kit but this time he stayed there for the entire performance, revolving on a platform that zoomed across the stage. He played Nico and Vinz’s Am I Wrong. It was delivered smoothly and made Kylie jump up like a groupie, following him around.

We then found out that Kat Jade had been saved in the public vote through the week. Not surprisingly, she nearly cried — leaving Robbie Balmer and John Linguard on the chopping block.

Robbie’s cover of Coldplay’s The Scientist was pretty bland. For a guy who is trying to be a rockstar, that’s not the song to do it with.  John was meant to do Chris Issak’s Wicked Game but then asked Kylie if he could cover her song Hand On Your Heart. Talk about sucking up to your idol! Nonetheless it was pretty snazzy and delivered with his trademark rawness and flair. The overuse of Chris (Martin, Issak) got will.i.am mighty confused — when asked his thoughts on who did the better performance; he vouched for ‘Chris’.  Dumbass!

And after the vote, Kat came back (minus her ears once again) to do Katy Perry’s Dark Horse.  Despite looking a bit awkward and being backed by some horrible synths at the start of the song, she turned things around with a solid vocal display from the chorus onwards.  I’ve been critical of her in the past but this time she took a huge step forward.

RESULT: Robbie edged out John in the one minute ‘Homecoach vote’ which sadly sent John packing.

Frank Lakoudis — or just simply ‘Lakoudis’ as I think he’s now being referred to — got lowered down from a makeshift stage in the sky to sing the Lenny Kravitz version of The Guess Who’s American Woman. Unfortunately his entrance was the highlight of the performance, as he failed to deliver the track with anywhere near the amount of vocal grunt required.

Holly Tapp got announced as the winner of the public vote earlier in the week. Joel must have racked up quite a phone bill trying to save her. That meant we were left with Issac McGovern and Taila Gouge fighting it out to stay on board.

Issac recovered from a horrible performance last week to do a passable rendition of Goo Goo Dolls’ Iris. Taila wiped the floor with him, though, with a solid take on Paramore’s Ain’t It Fun.

Finally, Holly returned after the vote to do a horrendous swing take on Beyonce’s Single Ladies. Whilst singing swing is cool, you just don’t mess with a classic like that one. Sorry Joel — but you’re failing to convince Australia that this girl has been worth the countless chances you’ve given her.

RESULT: Issac snuck through ahead of Taila — he must have had lots of teeny boppers on the app at just the right time. Taila was gracious in her final words though and showed a maturity beyond her 17 years of age.  Hopefully she finds her niche and pops up again somewhere soon.

Following their diabolical dismantling of Empire Of The Sun’s Walking On A Dream, Gabriel and Cecelia this time took on the much more tender I Dreamed A Dream from Les Miserables. Gabe’s solo vocals sounded a bit off but apart from that, they were incredibly captivating. As their coach Will said: “They are the real deal. For real.”

ZK were the shock winners of the public vote during the week, leaving Will’s two soloists Matt Verevis and Anja Nissen to battle it out for survival. Both didn’t deliver their best performances. Matt’s take on Elton John’s Rocket Man was ok but lacked a… ahem, lift-off moment, while Anja’s attempt to be Beyonce via her song Irreplaceable was more memorable for her facial expressions than her vocals. 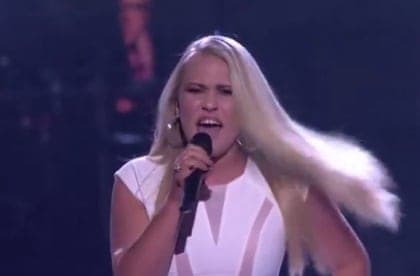 The Voice Australia: One of Anja’s many faces.

To round it out, ZK got all patriotic mentioning ‘their people’; doing an acknowledgement at the start of their performance and getting some traditional dancers to prance around in the background while they did their take on John Legend’s Imagine, complete with didgeridoos.  It was nice. But if it was a battle of the duos, Gabriel and Cecelia trumped them.

RESULT: A shame that two very talented soloists had to face off. Anja prevailed in the one minute scramble to save someone, though, sending piano-man Matt home.

At last, we finally get to Team Ricky – strategically placed as the final team again for the second episode in a row.  Maybe it’s because they’re light-years ahead of everyone else?

We got Jackson kicking it off with a cover of ex-judge Seal’s Kiss From A Rose. Cue this classic bit of banter following the performance:

Joel: “This is the perfect opportunity for me to talk about how much I love my brother, Seal…”
will.i.am: “Hey, I’m the new Seal!”

Oh, and the actual performance from Jackson wasn’t that mind-blowing. We then got the vote results and Sabrina was saved, leaving Elly and C Major in a showdown.

C Major ditched bongo drums from last week to hit the piano this time around, belting out a classy rendition of Justin Timberlake’s Senorita.  Elly, on the other hand, did the not-as-well-known Mama Do by Pixie Lott and showed she’s more than capable of turning her hand to a bouncy pop track with plenty of sass.

Finally, Sabrina took on Shakira’s Empire and once again made it her own, replicating her vocals (and hip-dancing) right on song.

RESULT: Two artists who both deserved to stay — but in the end, only one could, and that was Elly. On the upside for C Major, a glorious career as one of Ricky’s back-up singers could await him. He’d be right at home there.

Best performance: A close call between Gabriel & Cecelia and the eliminated Talia this week. Elly, Sabrina and even Kat get honourable mentions.

Kiel’s tip:  It’ll be interesting to see if the one minute Homecoach vote is used again. Either way, producers, please don’t subject us to the same awful scheduling and drawn out process this week. It may depend on how they perform on Monday night, but based on this week’s performances, Robbie (Kylie), Issac or Holly (Joel), Anja or ZK (Will) and Jackson (Ricky) face the chop.