The VoiceBox | Week 7: More Showdowns, then Sing-Offs and the dangling of plane tickets. 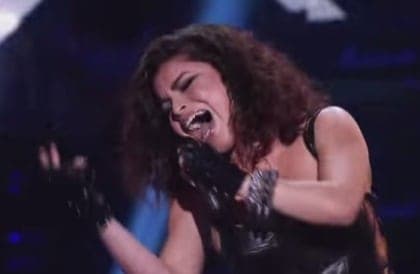 The Voice Australia: Cop that, pretenders! Sassy Sabrina Batshon belts her way into the live shows.

At last, after nearly two months in mainly weird pre-filmed vision, we are about to go live for The Voice Australia 2014.

But to get there, we had to sit through two nights of anti-climaxes as we had not one, but two eliminations rounds so the judges could finally make up their minds on who should warble live in front of the nation next week.

Sunday night saw the final lot of ‘Showdowns’ — and also saw the introduction of all the already-qualified finalists watching live in their ‘VIP Rooms’ so they could see who was going to join them.  Cue resident pest Team Kylie’s Kate Jade commenting, cheering wildly and occasionally crying every time she saw something happen.

Firstly, the good side of the action.  Will.I.Am bulked up on duos when he sent indigenous pals ‘ZK’ straight through to the finals after their version of A Great Big World’s Say Something — a choice pick given it was a male/female duet.  And anyone remotely into a bit of country twang would have been impressed by Team Joel’s Talia Gouge — who nailed her cover of Gretchen Wilson’s Red Neck Woman.  Drummer-turned-singer Johnny Rollins also took his moment to shine by delivering a carbon copy take of John Legend’s All Of Me, which earned him his ticket to the live shows.

However, stealing the errr… show, was once again Team Ricky’s pocket rocket Sabrina Batshon.  Despite looking hooker-lite in a leather get-up with some sassy moves, she blew the place away by turning on her vocal acrobatics in her cover of Whitney Houston’s Queen Of The Night.

In the process she soared above Ms. Dami Im 2014 – Elly Oh — who showed hints of nerves with her cover of that song from ‘Frozen’, Let It Go.

On the other side of the coin, two hopefuls crashed and burned in various departments.  Team Kylie’s Rosie Henshaw put herself up as fashion police fodder as she pranced around with her bass in some kind of hideous paisley-meets-tie-die-from-top-to-bottom ensemble. 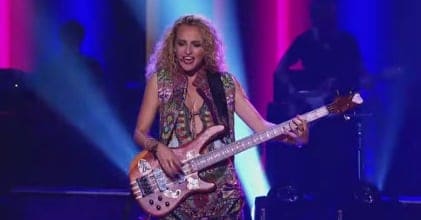 The Voice Australia: Rosie forgets some fashion bass-ics … hippy is so OUT.

Meanwhile, Team Ricky’s balladeer Luke McDonald found out the importance of sticking to your strengths the hard way — after his rendition of Avicci’s Wake Me Up sent the crowd running for cover with its cheesy arrangement.

To top it off, in the first of his eye-raising decisions across the two nights, Joel decided to give a reprieve to the sweet-but-not-so-amazing Holly Tapp — in favour of industry veteran and local cool cat Doug ‘Papa D’ Williams.  In some consolation, Joel invited Doug to play in his band when The Madden Brothers tour later in the year. Let’s hope he lives up to his promise.

With all that drama done, we then had to endure a night of ‘Sing-Offs’ — in which all those who were given a second chance got, well, just that.  And with the help of show sponsors Qantas, each judge helped raise the stakes by dangling airline tickets to either Hollywood, LA or London in front of their faces (and passing them onto their existing finalists). Talk about being a tease.

In this round, we got all three remaining hopefuls on each team being encouraged to spice up their original audition song and belt it out for us once again. Joy.  Anyway, piano man Mat Verevis did that the best, making up from a kind of sloppy performance the night before to be Will’s final team member for the live shows.

Also getting the nod was quiet one Robbie Balmer, who Kylie picked in favour of a super-showman performance from Lionel Cole and the very sweet but unfortunately not good enough Megan Longhurst.

Joel delivered arguably the shock of the night (and created a social media meltdown) when he snubbed sassy Soli Tesema and surfer chick Laura-Leigh Smith in favour of Holly Tapp once again, claiming he has a concrete vision for her and wanted to go with his gut feelings.  How about going with your ears, mate?

And finally, Elley Oh turned herself around with a super sultry performance of her much-talked-about audition song Mama Knows Best — blitzing her way into the live shows ahead of Thando Sikwila and former Hi-5 Star Fely Irvine. 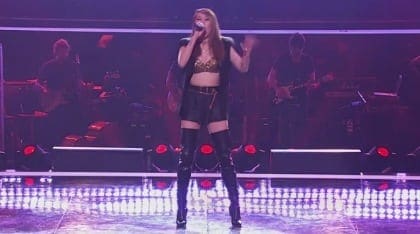 As mentioned earlier, all of the finalists will now hit the screens live on Monday night, and they’re also heading overseas for a couple of days to hang with their mentors.  For some of the remaining contestants — it’s a welcome reprieve for the country as a whole as they leave for a little bit.  But for the majority of them, it’s a great opportunity for learn and get some inspiration from a musical melting pot — watch this space to see if it does them any good.  Sabrina mentioned to Ricky that she has a plane phobia — so hopefully the producers have used their brains and whacked a camera on the jet to see if it uncovers some reality TV gold.

KIEL’S TIP: While Will has a very powerful and diverse collection of acts — and notably two duos in his team — Team Ricky still gets the nod from me, with Sabrina Batshon and Elly Oh genuine contenders to go all the way.  Look out for Frank and Taila to be dark horses for Team Joel, and John and Robbie to be Kylie’s shining lights.  Come grand final time, I believe we’ll be down to Anja, John, Frank and Elly.