THE VOICEbox | Week 1: What we already know and didn’t really need to know about The Voice Australia 2014. 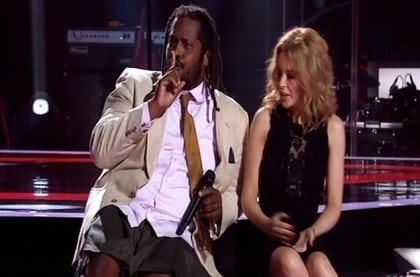 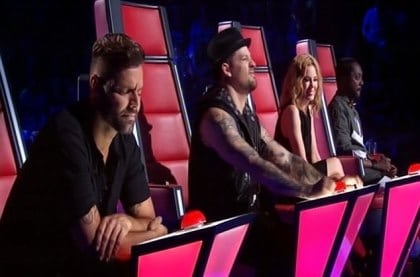 The Voice Australia, one of Aussie TV’s biggest reality juggernauts, has kicked off its third season.

Whilst the show is meant to be about the contestants and their voices (hence why it’s called The Voice, duh!) , it’s hard to not feel like the opening episode of The Voice Australia was all about the debut of the new judging panel.

For those of you not up to speed — Seal thought winning the first two seasons was enough of an ego boost and decided not to return while Delta Goodrem has been demoted to the new spin-off The Voice Kids.  So to fill in the gaps, the producers just looked to the UK version of The Voice — and dangled tasty pay-cheques in front of the eyes of the guy who wrote My Humps — Black Eyed Peas star Will.I.Am – and a nice homecoming for our favourite songbird, Kylie Minogue.

Right from the word go we had these cheesy excerpts from the mentors about why they are so great and why they’re so pumped about the show. Joel Madden, the only original judge left, remarked that the show is “like my baby… its part of who I am.” Yeah… we’re really glad that you’re back too, Joel.

Then we got the obligatory judges’ collab to kick off the season… filmed in some weird ‘you-can-tell-this-has-been-pre-recorded’ style.  And to play to Will.I.Am’s strengths (or maybe just extend the welcome mat a bit further)… we got them singing his track with The Script — Hall Of Fame — with clouds of smoke coming out of the stage every five seconds.  While Will bounced around in his white hoody and the kinda rap-flavoured bits suited Joel, nobody seemed to tell Ricky Martin that the track was a pop song and not a Broadway number.  And similar to her much-talked-about-sub-par Logies performance, Kylie’s voice seemed overpowered by some pre-recorded backing vocals (and cheering from the crowd). Mic check anyone? 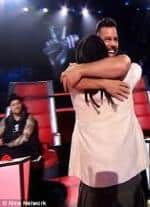 As each hopeful sang their hearts out, we got more footage of the judges doing their thing in the chairs, and slamming the button when they wanted a gander (or in Will.I.Am’s case, just casually dropping his foot on it).  Then they’d fight, ramble and use some rather cheesy lines to sway the contestant to join their team. Of note, Kylie requested bear hugs and a pow-wow on stage with Nat King Cole’s cousin Lionel Cole… but it was in vain, as he joined Team Ricky [Image and big bear hug, left (sorry Kylie)].

And then if that wasn’t enough, we got the judges commenting about each other in a series of one-on-one interviews away from the auditions. Will.I.Am used his ‘promo’ to waltz around with a backpack and his ‘Beats by Dre’ headphones on, waving an iPad in the air, while Ricky Martin happily added to the charm and strut quota in his piece.

Even host Darren McMullen was shoved into the background. We heard him narrate over the top and saw glimpses of him chatting with some of the contestants later in the show, but any new viewers would be left wondering who on earth he was and what his background is.

As for the acts themselves, one of the biggest surprise packets was Frank Loukadis. After divulging his cheesy past as a Greek dancer during his youth, he belted out Led Zeppelin’s Immigrant Song with some serious balls – grabbing everyone’s attention as he reproduced Robert Plant’s trademark screams.  If he wins the show and earns $1 million, his girlfriend is promising him a son. Talk about buying a Stairway to Heaven!

But by far the cheesiest/weirdest moment of the night came from the BFF of snorting, self-proclaimed introvert Kat G, who lost his marbles when his pal was able to get her new coach — Kylie — to sign his chest.  They thanked her by giving Kyles her own pair of cat’s ears.  While Kylie thought it was cute, and there’s probably a few Oxford St regulars who would be a bit jealous of the guy, the randomness of the moment and the dialogue that surrounded it sent the cringe levels skyrocketing. 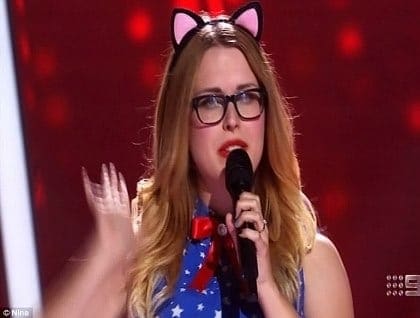 The Voice Australia: Contestant Kat Jade and those ears (groan).

BEST PERFORMANCE: Musical theatre-trained Matt Verevis showed his skill set when covering Billy Joel’s New York State Of Mind.  A great vocal range and a smooth personality, with piano skills to boot.  Will.I.Am picked him up after he discovered they both loved John Legend. He boasted: “I wrote Ordinary People… I got a few hits like that just lying around, ya know?”

He used that line (and a few other more sensible ones) to woo motorcycle riding, Blue Mountains teenager Anja Nissen onto his team.

TOOTHPICK ALERT: Thankfully, the editors of the episode decided to give us 1 hour and 8 minutes of toothpick-less joy before we saw a close up of Joel’s now famous accessory.