The VoiceBox | Week 11: What are the chances for our final five singers set to battle it out for a record deal, an extension of their 15 minutes of fame and a gold pass to the Aussie morning TV show circuit? Who will be The Voice? 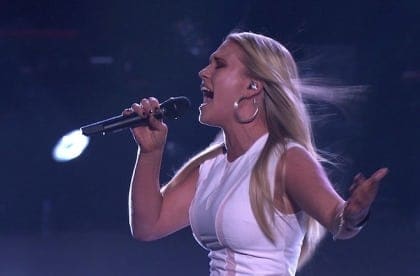 After 11 huge (and sometimes excruciating) weeks we only have one more gigantic episode of The Voice Australia left for 2014.

We’ve endured enough auditions, song butchering, wacky will.i.am antics, Channel Nine promos, awful dancing from the judges and Qantas ads with rolling text to last us more than a lifetime. But somehow we’ve come out the other side and are left with five artists who will battle it out on Monday night for that record deal with Universal Music, an extension of their 15 minutes of fame and a gold pass to perform on the morning TV show circuit.

Our finalists were confirmed after Monday’s night’s oh-so-drawn-out semi-final.  Along with will.i.am constantly walking in front of Darren McMullen’s shots, it featured duets, a huge collab with some of the young-uns from The Voice Kids, bon-bon shaking (and a tour announcement) from Ricky Martin and more use of the Homecoach app. But this time the app proved to be a saving grace (more on that later). Here are our five remaining contenders for The Voice Australia 2014 — and my thoughts on how they’ll fair in the grand finale:

Jackson caused the first boilover of the penultimate show this week by prevailing over hot favourite Sabrina Batshon in the public vote to rep for Team Ricky in this coming Monday’s finale. I doubt Ricky would have imagined that someone who lost in the battle rounds (and whom he saved) would be his last man standing!

Since that horrid battle with fellow cat warbler Robbie Balmer, the 24-year-old Geelong electrician has won the crowd (or should that be voters?) over with his heartfelt vocals, tinged with classical undertones.  He’s arguably been the best contestant in the comp when taking a song from another genre and making it his own.

Best Performance: His cover of Armin Van Burren’s dance anthem This Is What It Feels Like was superbly re-arranged and ensured he escaped the first round of public voting amongst fierce competition in Team Ricky.

Quite the smooth and soulful character, drummer-turned-vocalist Johnny has sailed through to the final as the shining light in arguably the weakest team of the competition.  Whether it’s been on his drumkit, backed with a choir or just riding solo, he’s remained a cool cat and replicated his song choices almost identically to the original artist.  Johnny definitely offers himself as a different type of artist that Australia hasn’t seen before — a soul-flavoured vocalist and percussionist — but whether that can have ongoing marketability is another question.

Best Performance: Monday night’s cover of Percy Sledge’s When A Man Loves A Woman was enough to make any lady swoon and was the best showcase of his vocal talents yet too.

Odds: Has surprisingly surged to be the outright favourite with the bookies at 2/1.

Looking a tad reminiscent of X-Factor’s original winner Altiyan Childs (but without the cuckoo behaviour), Frank has taken on numerous big rock tracks and delivered the majority of them in respectable fashion.  I’m not sure if Frank — sorry, he’s been dubbed ‘Lakoudis’ for a while now – can get much longevity post-Voice beyond potentially opening for The Madden Brothers on their next Australian tour. But he definitely has a voice that deserves to be heard beyond the cover band and local pub circuit.

Best Performance: His cover of Bon Jovi’s Keep The Faith in the Showdowns signalled his arrival as a genuine force in the competition.

Making history as the first duo to ever reach the final, duo Zaachariah Fielding and Kristal West are as shocked as most of us that they’re still in it. Someone’s clearly spending a lot of money voting for them as week after week they’ve topped the public vote over other artists in Will’s team who arguably had the better vocal chops.

But it’s this strong support which has also made them the dark horse in Monday’s final and, regardless of the outcome, they definitely have a future in the indigenous arts scene. And to be fair, most of their performances haven’t been half bad either.

Best Performance: The coaches have often referred to them as ‘magical’ and ‘captivating’ and their take on John Lennon’s Imagine — complete with didgeridoos, traditional dancers and an acknowledgement to their ancestors at the start – was the apex of that.

I’ve panned the producers for quite a few things this season (the scheduling, the vision, making us endure some of these artists week after week) but their decision to allow an extra finalist this year (albeit via a one minute snap vote in the Homecoach app) has been easily the best thing they have done.  Because if they didn’t, we wouldn’t have such a quality contestant in Anja Nissen left in the competition.

She has prevailed over fellow public vote losers Sabrina Batshon, Kat Jade and Holly Tapp, and you need only take a split second listen to one of Anja’s performances to see why it’s a crime she was almost not included in the finale.  At 18, she has the pipes and a vocal range which, in time, could be compared with the likes of her idols such as Mariah Carey and Aretha Franklin.

Best Performance: Monday night’s performance of I Have Nothing by Whitney Houston elevated her into a new stratosphere (and subsequently added to the shock value when she lost the public vote to ZK).

AND THE WINNER IS..?

Several media commentators have remarked that despite being a local TV ratings juggernaut, The Voice Australia has failed to produce a winning artist that is a genuine megastar able to create a splash beyond churning out a new record every Mother’s Day.  The best chance for Channel Nine, Shine Australia and Universal Music to kill that trend is if Anja Nissen takes out the big one on Monday night.

Her coach, will.i.am, has remarked that if she wins, Australia is going to be “blessed with a true global superstar” — and he’s right on the money.  Anja has vocals, looks, marketability and plenty of age on her side, and if this program is truly about living up to its title and finding ‘The’ Voice — she is the best remaining contestant worthy of that title.