The Stonefield sisters are here to stay

It seems everyone is starting to take notice of new Aussie band, Stonefield. Composed of four young sisters from country Victoria, the girls are slowly taking over the world, beginning with Glastonbury last month. 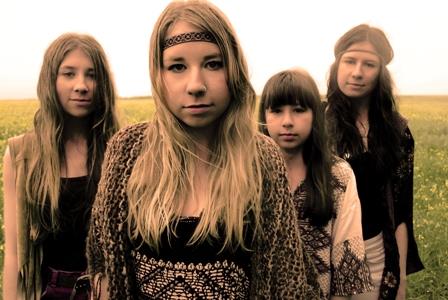 THE four Findlay sisters grew up in country Victoria an hour north of Melbourne. They picked up instruments from a young age and started bashing away at home while listening to their parent’s Jimi Hendrix and Led Zeppelin albums.

Pretty soon, something beautiful clicked and Stonefield was born. The sisters started playing local gigs, then won a Triple J competition. They started to establish a name for themselves and before long were touring around Australia. Then, seemingly out of nowhere, the girls received one hell of a surprise. They were signed up to play at this year’s Glastonbury, you know, that small festival in a field somewhere. No big deal… Seriously though, it seems everyone is starting to take notice of Stonefield.

Amy (21), Hannah (18), Sarah (15) and Holly (13) had a chat with Australian Times before their London show last week, and still giddy with excitement from the muddy fields of Pilton Farm, it was hard to keep up as they chipped in and finished off each other’s sentences. It was great to hear about their experiences and the enthusiasm radiating off the girls was very infectious. For my sanity and the collective voice they have, I’m going to call them ‘Team Findlay’. Enjoy.

How did you guys get score an invite to the biggest music festival in the world?

Team Findlay: We played at a festival in Perth last year. After, someone came up to us and said they’d like us to play at Glastonbury. We knew what it was but we weren’t sure just how big it was.

To be honest it hasn’t even sunk in yet, it’s still a weird feeling. The night we were driving in and saw all the tents, we were like ‘this is crazy’. We can’t believe we got to play there. Maybe when we go home it will hit us where’ve we been.

How was your set? How was the crowd and atmosphere?

It was so much fun walking out on stage to see the crowd of thousands plus it was our first international gig.

The crowds were friendly but we thought it was weird there wasn’t much dancing. At home they dance but [at Glasto] they were just kind of swaying a bit. We realised the mud was too thick for people to move their legs! After we played ‘Whole Lotta Love’ people began dancing through the mud. (Holly then does a demonstration which could become a Stonefield dance sensation)

Once you finished did you go and enjoy the festival?

We stayed for the whole festival. It was a great vibe! Watching Coldplay, everyone was dancing and having fun. We loved exploring the place and trudging through the mud. It was gross but fun. Amy even did a face-plant in the mud which was funny. (Not mentioned by Amy, but isn’t that what sisters are for).

What’s next when you get home, back to class and the norm? (Sarah and Holly are still at school)

We’re supporting the Kaiser Chiefs and then doing our own tour. We have to do homework and catch up in between. We’ve known for a long time this is what we want to do with our lives but this trip has made us even keener to see the world and play our music wherever we can.

An amazing way to start themselves on the musical world stage for the sisters, I hope Stonefield will stay there for a long time to come.