INTERVIEW | The power of Paul Kelly

INTERVIEW | Paul Kelly, folksinger, songwriter, Australian music legend. GEORGE KATRALIS talks to the man behind the myth ahead of his London show at Cadogan Hall on Friday 12 April 2013. 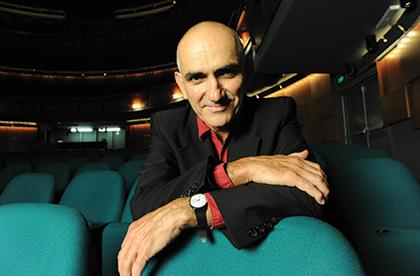 SO, there I was. 18. The perfect mix of naÃ¯ve, judgemental, brash, pigheaded — and a musical snob. Addicted to John Cusack’s portrayal of Rob Gordon in High Fidelity; the professional music appreciator. Or, for lack of a better word, a dickhead.

I was with my one of best mates, standing in Sydney’s Centennial Park on an oddly cold day in March. With the threatening grey clouds just barely impeding the rain that was soon to sure hit, we, like thousands more, were there for one reason and one reason only. Bob Dylan.

Sadly though, and much to my protest at the time, we first had to sit through some guy I had never heard of. Some guy named Paul Kelly.

Now, please forgive me. Remember as you read this teenage arrogance was at an all time high. I was just old enough to know everything and dumb enough to judge anything. Honestly, I had no interest in seeing a guy who all week had been billed as ‘Australia’s answer to Dylan’. How dare they?!

We took our seats as Paul Kelly walked out, acoustic guitar in hand and harmonica in mouth. “Yeah, this should be good,” I said to my mate with sarcasm, thinking this lanky guy was about to perform what would be a cheesy parody at best. And then he started playing.

I couldn’t tell you what his opening song was now, but needless to say I’m glad teenage arrogance didn’t get in the way of better judgement. One storytelling ballad in and this brash, pigheaded, musical snob was hooked. From then on, I was a Paul Kelly faithful, and have sung the man’s praises and seen him live at every chance I could since that fateful day.

Earning his place on the mantle

Folk, rock, roots, blues and storyteller. You can’t deny the man’s legend or underscore his importance to Australian music. With a still active recording catalogue that spans 19 records over a 32 year period (not even counting the eight years spent playing live before anything was even committed to tape) Paul Kelly has done the hard yards and earned his place on the mantle that is Australian music history.

Now, this could well be the musical snob and proud Aussie in me coming out, but in my opinion Australia has always been at the forefront of the music industry.

While England had The Beatles, we had The Easybeats.  In 1976 the Sex Pistols were getting all the credit for creating Punk. However little did they know, two years earlier in 1974 Chris Bailey was busy inventing it in Brisbane with his lil’ band called The Saints.

Later that same year, down in Hobart, a 19 year old kid named Paul Maurice Kelly walked onto a dimly lit stage and made his debut at a folk club named Salamanca Place. Which is where our story really begins.

“They had a night where anyone could get up. I sang Dylan’s ‘Girl from the North Country’ and ‘Streets of Forbes’,” he tells Australian Times.

“I can’t really remember how it went — I remember I had a lot to drink afterwards from relief. I was incredibly nervous.”

First, the man is genuine. He talks like he writes. He answers all my questions with deep thought, coupled with a story that ultimately takes me on a journey to get to the end. It’s easy to see why his songs are so good.

Second, he’s not one to dwell on or get stuck in his past. His response to my glorification of his legend is simple and humble.

“I’m not worried about that. I’m a writer. I’m more concerned with trying to write the next thing rather then looking back on what I’m supposed to be,” he says.

“The most important thing for me is to have these songs. They are like companions I can travel with.”

From ‘Dumb Things’ to ‘To Her Door’, ‘How to Make Gravy’ to ‘When I First Met Your Ma.’ It can be said Paul has quite the stash in his swag, with travel companions enough to travel the world twice over. But, in the spirit of this interview, I’m also not going to dwell on Paul’s past. You know it. You own it. And if you don’t, you should.

What we will talk about is Spring and Fall, Paul Kelly’s 2013 release and 19th studio album.

Strangely though it’s at this point we have to visit Paul’s past just once more. Because if it weren’t for an aspect of it, Spring and Fall would not have seen the light of day.

Enter Dan Kelly. Not only is Dan Kelly Paul’s current collaborator and sparing partner, he is also Paul’s biggest fan, and his nephew.

“You like to play with mates, guys you can get on with. He knows my records better then I do, because he listens to them more then I do,” Paul says.

“Once you make records you don’t really listen to them anymore. You play the songs, but you then get to know the songs in a different way. You start singing them differently and they start evolving.

“Dan knows hundreds of my songs without rehearsal. I love his playing, he’s got variety. He can be very cinematic, ambient, and supportive or he can be quite present. I never get bored playing with him.”

With such praise for his young counterpart Paul began the process of writing Spring and Fall. An album which I believe to be the best he has released in quite some time. Once again, Paul has gone back to create something that moves forward.

Paul says it was a conscious decision to move away from the temptation of a full band and play a more stripped back style of music.

“I had assembled a group of songs that suggested it could be a storyline for the whole album, so I consciously started to think of the record as one long story and that story would be best served by some quite sparse music.

“I got Dan in and our producer Greg “J” Walker joined us on double bass and we ended up with a musical trio. It was once the bass was added that the record got some direction.”

Some concept albums fall into the trap of paying too much attention to over the top sounds, or just being weird for the sake of being weird.  However, Spring and Fall, from its post-impressionist cover art of a content couple, to its stripped back sounds and storytelling lyrics, feels like a complete piece of work. It takes the listener on a journey they want to be part of. It has a start, and it has a finish. To listen to it out of order almost feels criminal. The beauty of this album lies in its exploration.

As for Paul, I ask him – who could portray a life so serious? Maybe one like his?

He quips back with a quote I’ll remember for some time to come.

Paul Kelly on the making of Spring and Fall: