The NHS is stretched, so is this sketch

A new Aussie play is about to split London down the middle. Conor McGlone got down to the Etcetera Theatre in Camden for a sneak preview to see what the fuss was all about. 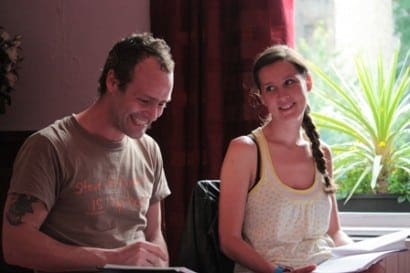 JUST like the UK healthcare system depicted in Alternative, this play is flawed. On the other hand, just like the NHS -just think of the first man in England to be given a plastic heart last week, it has its moments of inspired brilliance.

Australian Trent Burtons’ latest effort, Alternative, is a topical story of Will’s (David Swain) battle to overcome an unknown illness. After failing to make any headway with his hilariously incompetent GP, Will is persuaded, grudgingly, to consult his alternative therapist sister.

Although Swain does oversell sequences at times, producing a few garbled lines, his performance is strong. Adam Bambrough plays the infuriating GP and steals the show with apparent ease — his looming and clumsy presence is a master class in humour.

Scenes with the Doctor, who thinks he is ‘Doctor House’, and an anxious patient gradually being driven to hysteria and terrific sarcasm are by far the funniest. Other performances however, leave a little to be desired and sympathy for some characters is hard to drum up.

Burton clearly has a sharp wit and whilst the show is peppered with some genuinely side-splitting moments, some gags were a little dubious. For example, “How did he get to become a doctor?” “Maybe he’s a vet that got lost.” Point taken?

The problem is, Burton implies in his program notes that his show provides a deeper message and could ultimately help those ‘considering their medical options’. Truthfully it doesn’t, and couldn’t. The insight we gather is that alternative medicine is a ludicrous con whilst at the same time modern science is not much better. Where is the lesson there then? It would seem that either way in illness, we are doomed to the only remaining option of willpower driven self-cures.

Overall the show is certainly a goer for an entertaining night out and perhaps with an improvement from the supporting cast, could shine brighter. Just take it at face value, don’t try and read too much into it, and have a laugh! It’s definitely a six out of ten and an ‘alternative’ chance to support Aussies in London.

Don’t miss Alternative at the Etcetera Theatre in Camden from 13 — 18 September.