The man who is Madonna – Michael Griffiths at Edinburgh Fringe

INTERVIEW | For five nights in August, Michael Griffiths - star of Jersey Boys - is Madonna. In Vogue: Songs by Madonna is a cabaret show at the Edinburgh Fringe, which sees the Queen of Pop at the piano, playing all of her hit songs. 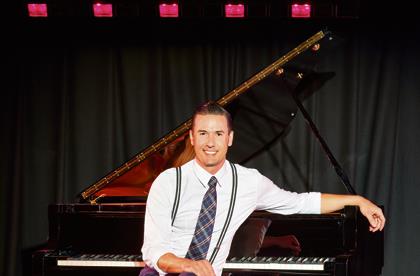 CLOSE your eyes. Imagine Madonna in a cocktail bar, sitting at a piano, performing all her classic hits. With no gyrating choreography in sight, she would sit still, play a few chords and talk to the audience.

“My mother loved classical music, besides her kids it was her passion,” a candid Madonna begins to reminisce. “So I walked down the aisle to marry the man of my dreams to my mother’s favourite song.” The Queen of Pop then performs a heartfelt (and live) rendition of her 1986 single True Blue.

Created by Griffiths and Dean Bryant, the acclaimed writer and director, In Vogue: Songs by Madonna pays respect to an often forgotten feature of the iconic singer.

“I think she is a very clever songwriter and lyricist, and to my knowledge it’s not something discussed, people don’t acknowledge it,” Griffiths says.

“People are just too swept away in all of the other controversies in her life and don’t think about her as actually being a very sophisticated and accomplished lyricist.”

But don’t be mistaken In Vogue is not simply a Madonna tribute show.

“We do poke fun at her. We love her but we’re Australian, so we have to take the piss. It’s in our nature. Even though we put her songs on a pedestal,we hang sh*t on her failed movie career, her failed marriages, and stealing black babies.”

A graduate of the Western Australia Academy of Performing Arts (WAAPA), Griffiths has performed in We Will Rock You, Priscilla Queen of the Desert, and recently finished a five-year tenure with Jersey Boys, starring as Bob Crewe.

When Bryant approached him about doing a cabaret, for Griffiths, a huge Madonna fan, only one name came to mind.

“Very early on I said I want to be Madonna. I certainly never wanted to sound like her musically, but I thought to be her creates this lovely, camp, immediacy because it just puts you in the room with her so the stories really resonate.”

The show contains no conical bras, lace wedding dresses or leotards. Griffiths performs as Madonna in a shirt and tie, no wig, and his Australian accent.

“I never actually say I’m Madonna…people just go there, because it’s a given and it’s absurd, and audiences are tickled by it because it is so ridiculous. Then they forget and half way through the show you just get so caught up in the stories and the songs, because they’re so good.”

For an artist whose career spans three decades, and whose discography contains over 70 CD singles, to pick which Madonna songs to include was not an easy task. After listening to every song, Griffiths sat down at the piano, found a key to suit his baritone voice and began writing new arrangements.

“Some songs work when they’re stripped back, and some songs just don’t. So it was a combination of how does it sound with a male voice and piano, and then also does it lyrically lend itself to her biography because we wanted to tell her story, because her story is in her songs.

After listening to Griffiths’ original arrangements, audiences in Australia, New Zealand and New York have found a new love for these tunes.

“People say ‘Oh my god I had no idea there was so much storytelling in these songs.’ Because when you listen to a pop song you’re seduced by the sound and the beat and you can dance to the arrangement. So when it’s just the lyrics and a piano, suddenly the lyrics have so much more weight.”

And of course no Madonna show would be complete without the hits.

“We had to have Vogue, Like a Prayer and Express Yourself. These are non-negotiable. We also put Like a Virgin and Material Girl in even though she didn’t write the lyrics to those songs, but they’re so iconic we just thought we had to have them.

In Vogue: Songs By Madonna is on from 8-17 August at The Boards at The Edinburgh Playhouse. To book tickets visit www.edfringe.com