MUSIC FESTIVALS | The best music festivals in Europe for 2012. 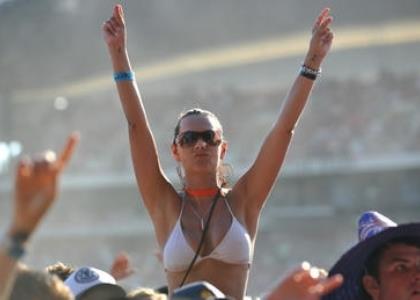 Europe’s best music festivals for the adventurous music lover in 2012.

Rock am Ring and Rock im Ring festivals are the European cousins of the Reading/Leeds super-fest. They’re Germany’s most popular festival event and they draw lots of party goers, drinking lots of German beer, having lots of fun. And if you’re into your goth and metal acts…well, let’s just say you’ll need a chiropractor after looking at the 2012 lineup.

One of Europe’s most loved festivals, the big name line-ups make this fuss-free fiesta ever popular with revellers from Pamplona’s Running of the Bulls, many of whom combine the two on their Spanish party trail.

This open air festival in the foothills of the beautiful French countryside by Malsaucy is the sort of thing to go ‘ooh, la, la’ for. Nevermind the fact that you can pitch your tent at the teepee village’s free campsite or that you are in France, the gastronomical capital of the world (hmm French cheese and wine), but some darn good bands play here too – from old school faves to new age superstars.

Roskildes howcases Scandinavia’s finest and my are they fine (the bands, you perve!). Big name punk, rock and metal bands share the stage with indie gurus and timeless favourites (we’re looking at you Boss) and this year even includes Australia’s very own The Barons of Tang and Gurrumul.

Ok, so you want some Spanish sunshine, maybe a jug or three of sangria and some sensational tunes? Welcome to Benicassim! Bathe in the Med by day, bathe in the beats by night. This has got to be one of the best festivals ever – where you combine a beach holiday with ridiculously good bands. (Um, sir – can we have mid July off please?)

This seven day river island festival boasts huge international performers, hundreds of thousands of people and stages as far as the eye can see. Set in the scenic surrounds of one of Europe’s most beautiful cities, Sziget is basically the whole world coming together on one island in Eastern Europe over seven days. Epic!