REVIEW | No matter how many times you hear them, when The Cat Empire take the stage, you better have your dancing shoes on. 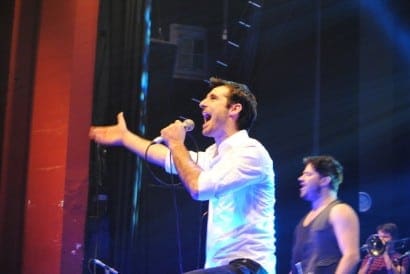 NO matter how many times you hear them, when The Cat Empire take the stage, you better have your dancing shoes on.

From the moment the first trumpet was blown, the Aussie jazz kings seemed intent on keeping the London winter at bay by setting Shepherd’s Bush alight.

Performing to a sold-out crowd at the Shepherd’s Bush Empire , the Melbourne based band gave the audience a jazz-infused dose of home and delivered a set that made dancing compulsory.

The Cat Empire are touring the UK to celebrate their tenth anniversary and if the response in Shepherd’s Bush is any indication, audiences are ready to party. In fact, so keen was the crowd to help the the band celebrate, singer Harry James Angus had to pause to allow them to sing an impromptu rendition of Happy Birthday.

With a set spanning five albums and a decade of jazz and ska infused hits, the Melbourne lads managed to keep the crowd in a permanent state of hysteria. While Harry, and fellow Empire singer Felix Riebl prowled that stage, switching between instruments and vocal styles, the band made sure arms were waving and hips were swaying from start to finish. And there was little respite for the crowd as the band’s relentless percussive, brass and keys sections took turns in transforming the Shepherd’s Bush Empire into a buzzing jazz club.

It was a cracker of a set from one of Australia’s favourite bands who used hits such as ‘Two Shoes’ and ‘So Many Nights’ to show they are as polished and energised as ever.

And it’s hard to believe that we’ve been dancing along to homeland hit ‘Hello’ for nearly a decade, but The Cat Empire proved it remains as popular as ever by delivering a version that turned the crowd into a frenzy and threatened to bring the roof of the Empire to the ground.

It may be The Cat Empire’s tenth birthday party, but it seems all the presents are for us.