The best British music festivals for 2012

MUSIC FESTIVALS | The staff's pick of the greatest British music festivals for 2012. 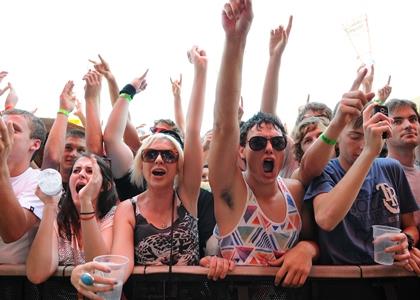 Our staff’s pick of the greatest British music festivals for 2012.

When: 10-12 May
Where: Brighton
Highlights: DZ Deathrays, Maximo Park, We are Scientists, Mystery Jets, Dry The River.

Escape to Brighton for a rhythmic explosion of new talent. Britain’s answer to South by Southwest, this is Europe’s leading festival for new music.

When: 17-19 May
Where: Liverpool
Highlights: The Temper Trap, Alkaline Trio, Death In Vegas, Bear In Heaven, By The Sea.

Into your indie? Slap on your skinny jeans and get up north for this alternative rock fest. There are plenty of new names on this year’s bill with loads of fresh Aussie bands, plus The Temper Trap.

This monster festival on the banks of the Loch Ness boasts an eclectic selection of bands to enjoy with your pint haggis. What more do you want?

It’s the UK’s hardcore home of metal and this premier rock festival is celebrating its 10th anniversary with the mighty Metallica performing their Black Album in its entirety. Full-on circle pit action and tats aplenty.

It’s alternative, it’s fun and this year you can catch Peal Jam, Jessie J and Tinie Tempah rocking it out on the island. It’s also rumoured Kate Moss and Jamie Hince will be making an appearance, choosing the exclusive festival to renew their vows.

No sponsorship, no branding and no VIPs means this funky festival has no pretences – just music, as it should be. Having hosted the likes of Prince and The Eagles last year, the faithful will be back with the 2012 instalment featuring old gravel throat himself, Mr Bob Dylan.

T in the Park

Known for attracting the liveliest of audiences, this is Scotland’s largest and longest established music festival. Featuring stacks of A-list headliners; a festival is not to be missed.

More than just music, Latitude is a sumptuous cultural festival. Set on a grand old English manor, it features magnificent forest and lakeside stages, and with a host of incredible activities including contemporary art exhibitions, theatrical installations and a literary arena — you certainly won’t get bored!

Year after year this ‘party’ festival attracts the craziest and most flamboyant of followers. With its other-worldly sounds and surroundings, SGP is a magical escape from normality. Leave your rational self at home — here, silliness is encouraged and madness is a perquisite.

Two venues, two days of chart topping acts. We can’t guarantee Dicky Branson will be there with his Virgin spaceship, but the festival will be serving up a decent dose of pop, rock and r&b that will satisfy the tastes of every good little consumer.

Reading
When: 24-26 August
Where: Reading (andLeeds)
Highlights: The Cure, Foo Fighters, Kasabian, At The Drive-In, The Vaccines, Kaiser Chiefs, Paramore, The Black Keys, The Maccabees.

If they’re on the bill here, you know they love to play cos they tear the roof off in one town, then head to the next and do it all again the very next day. With a diverse line up of acts ranging from indie and alternative rock, to punk, metal and dance, this festival won’t disappoint. And to top it off, it’s over the August Bank Holiday. Winner!

Sporting fireworks, freak shows and a Bollywood bus bar, Bestival is the Isle of Wight’s flower power love child. With diverse musical acts and a carnivalesque feel, you can let loose and embrace your inner hippie. Oh, and don’t forget your fancy dress!