The Ballad of Backbone Joe

A murder mystery, rigged boxing match, a foreign Private Eye, voices from beyond the grave and some rollicking good bluegrass tunes. What more could Aussie comedy trio The Suitcase Royale have packed into their show at the Soho Theatre last week? 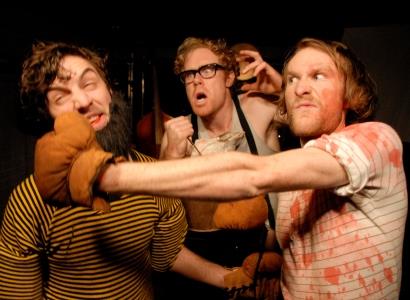 A murder mystery, rigged boxing match, a foreign Private Eye, voices from beyond the grave and some rollicking good bluegrass tunes. What more could Aussie comedy trio The Suitcase Royale have packed into their cracking less-than-one-hour show at the Soho Theatre last week?

Probably not much – but that’s okay, I doubt we could have handled the hilarity.

With their witty dialogue, utterly engaging characters and masterful use of thrown-together props and puppetry, The Suitcase Royale had the audience enraptured with their show The Ballad of Backbone Joe at the Soho.

Following the story of kind hearted yet easily manipulated outback boxer Backbone Joe, his ruthless trainer and local butcher Dan and the mysterious Private Detective trying to get to the bottom of an unsolved murder, we laughed at them, with sang along with them and we went with them every step of the way into the underbelly of the 1930s Aussie outback. The show was truly touching in parts, toe tapping in others but mostly, it was bloody hilarious.

Even the gaffes and ‘skeleton malfunction’ gave the show’s crude set a comical charm that only made it all the more enjoyable. And their unashamed embrace of their not-so-subtle costume changes and props, and deliberate misuse of sound effects only made you love them even more.

The show was a beautiful balance of Aussie larrikinism, outback intrigue and comedy theatre. But above all it was a ripping yarn with knee-slapping results.