The Australian author getting more kids in the kitchen

Children’s cookbook author Sabrina Parrini sat down recently with Nathan Motton to talk about her new book and why keeping children away from fast food starts at home. 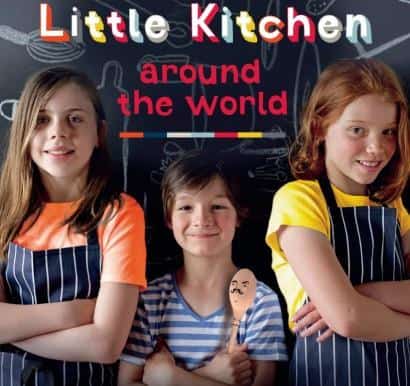 SABRINA PARRINI describes it as “luck” but her determination to inspire young people into the kitchen is no coincidence.

Parrini’s love affair with children’s cooking began as an early childhood teacher when she was blown away at the level of enthusiasm shown by children at such a young age.

“Cooking was the most popular activity at kinder with girls and boys. Whenever we announced it was cooking time, (they) would all rush to the bench. Whereas there was a gender divide with other activities. It got me thinking it would be great to encourage more children to cook,” she told Australian Times recently.

Sitting down over a coffee in Covent Garden, the delightful Melbournian says it was then in 2004 that she found the courage to boldly create Australia’s first children’s cooking lifestyle brand, Little Kitchen.

“At the time there didn’t seem to be anyone focusing on kids and cooking exclusively and trying to change people’s perception, and let people know that kids are capable of cooking. It is a really good activity to teach them when they’re young. It’s a lifeskill.

It was from those humble beginnings that Parrini created a mini-revolution. The school opened in North Fitzroy in 2004 and in just two years taught more than 5,000 children the basics of cookery.

“Kids like getting messy, they like feeling things, touching things. Cooking is traditionally the realm of adults, they (children) like mimicking what adults are doing,” she said.

As “luck” would have it, Parrini was then approached by a publisher about writing a book, and has since released Little Kitchen and Little Kitchen around the world. The latter, her newest release, features 36 recipes from a host of global cuisines. It is written for eight to 12 year olds but she says the response from Australian children and parents has been overwhelming.

“I didn’t expect children to be so into Japanese and Mexican… even Indian and Chinese. I think it’s because Melbourne is so multicultural… but also because there are a lot more cooking shows out there, children are (now) seeing cooking shows from all over the world,” she said.

Parrini says she has noticed a change in culture since she set out to train the nation’s children. She points to author Stephanie Alexander’s work with the Kitchen Garden Foundation, as one example of a notable shift over the past decade in teaching young people about the benefits of fresh, homemade food.

“If you teach children to cook early on in life, they’re not going to opt for takeaway every single night, they’re going to be able to cook for themselves. And also cook for their friends and family… It’s a way to show that you love and care for them, it’s nice to pass that onto your kids.”

Sabrina has shared with Australian Times one of her favourite holiday recipes: chai tea cupcakes

Place the milk and chai tea in a small saucepan over medium heat and stir well with a wooden spoon. Bring to the boil, then remove from the heat and strain into a small bowl.

Place the butter, sugar and vanilla in a large bowl. Using an electric mixer, beat on high for about 3 minutes, or until light and fluffy. Add the eggs and beat well, scraping down the sides of the bowl with a spatula a few times.

Add the flour, spices, baking powder and strained milk. Beat on medium speed until well combined. The mixture will be very thick and creamy.

Evenly spoon the batter into the patty cases with a metal tablespoon, filling them nearly to the top. Try to smooth the top as best you can.

Bake on the middle shelf of the oven for 15—20 minutes, or until a skewer inserted into the centre of the cupcakes comes out clean.

Remove the cupcakes from the oven using oven mitts. Take them out of the tin and place them on a wire rack. If you like, you can leave the cupcakes to cool completely, then ice them with chocolate buttercream frosting.

If you’d prefer, you could just lightly dust the top of the cupcakes with icing sugar instead of using chocolate.

Little Kitchen around the world is available now via Hardie Grant