The National Gallery at Trafalgar Square is renowned as home to some of civilisations most iconic works of art, from van Gogh’s Sunflowers to da Vinci’s Virgin on the Rocks. 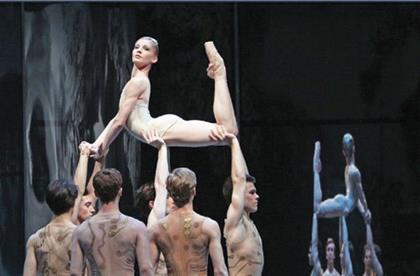 The National Gallery at Trafalgar Square is renowned as home to some of civilisations most iconic works of art, from van Gogh’s Sunflowers to da Vinci’s Virgin on the Rocks. The museum also plays host to some of the world’s greatest cultural treasures, from the famed studios of Florence to the dance studios of the Gold Coast.

One of those talents, Aaron Smyth, has come a long way in the three years since leaving Australia in pursuit of his dream. The 21 year-old ballet dancer achieved the pinnacle of his career earlier this year when he was invited to join Britain’s The Royal Ballet. He is currently featured as a part of the troupe’s involvement in The National Gallery’s temporary Metamorphosis: Titian exhibition.

Smyth is one of several dancers currently working with The Royal Ballet, and was honoured to be a part of the revolutionary collaboration between the world-famous dance company and the wider artistic community.

“I don’t think that I ever expected that I would one day end up in The National Gallery in London as a result of my dancing. It is definitely a surreal experience to see myself dancing in a place as significant as this.”

Prior to joining The Royal Ballet in early 2012, Smyth lived in New York City and trained with the American Ballet Theatre’s youth organisation. He first became a recognisable name through his participation in the 2008 series of Australia’s Got Talent, where his self-choreographed dance routines led to Smyth reaching the show’s grand finale.

Smyth’s life-long commitment to dance has led to his participation in several international tours with both the American Ballet Theatre and, more recently, The Royal Ballet.

“I am living my dream in being able to see the world while doing something that I have always loved” Smyth told Australian Times. “Dancing with The Royal Ballet in London is a huge honour and I am grateful for all of the experiences that ballet has allowed me to have over the years.”

The Metamorphosis: Titian installation is a partnership between contemporary artists and The Royal Ballet, in which the artist Titian’s masterpieces have been reinterpreted as a multi-modal experience incorporating poetry, visual art and movement. The current exhibition and Titian’s original paintings were both inspired by the work of ancient Roman poet Ovid, whose themes of transformation inspired a wide range of prominent Renaissance artists.

The Royal Ballet’s contribution to The National Gallery exhibition served to interpret three of Titian’s most famous paintings through the medium of dance.

Metamorphosis: Titian includes video footage of the company’s dancers performing their interpretation of Titian’s material, alongside examples of the costumes and sets utilised in The Royal Ballet’s original performance. The exhibition focuses on the processes involved in the choreography of the ballet and the recreation of Titian’s visual style on stage.

Smyth found the experience of using dance to interpret Titian’s classical paintings to be a unique way to combine the mediums of dancing and visual art.

“Working on Metamorphosis was unlike what we would normally do as dancers, but it was surprising how much that the themes of the paintings could be expressed through movement just like in any traditional ballet.”

Metamorphosis: Titian can be found in the Sainsbury Wing of The National Gallery until the 23 September. Admission to the exhibition is free.