The Art of Manliness

In recent years, manliness has found itself under assault by make-up companies, diet gurus and even breweries. But there are a group of Aussie men who are bringing the fight to the UK. Men, manly men! 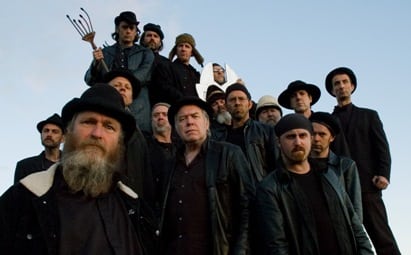 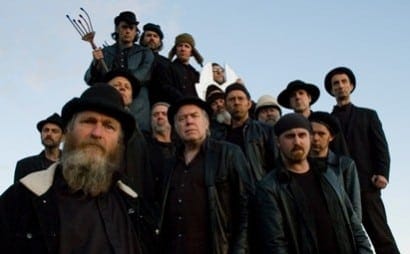 In recent years, manliness has found itself under assault by make-up companies, diet gurus and even breweries.

Despite a valiant resistance in the form of lumberjack shirts, real ales and Movember, society still groans under the strain of life’s big questions — What is man? How does man? Where can man?

But the answers are not to be found with policy wonks in Whitehall, or gurus on the peaks of the Himalayas, for they lie deep within the heart of Australia’s Blue Mountains.

“We are spooky men,” sing the Spooky Men’s Chorale in a haunting modern-day Gregorian chant. “We dream of mastodons. Practice mysterious handshakes. And we can grow beards if we want to.”

Led by Stephen Taberner, a Woody Harrelson-lookalike with a penchant for public mischief, the group has sold out concert halls around the world for over 10 years, calling men to get in touch with their “inner 22-stone tribal chieftains”.

Now part-way through a tour consisting of 52 gigs in 49 days around the length and breadth of Britain, the ‘Spookies’ have brought the fight to the land of Russell Brand and Hugh Grant the only way they know how — through song.

“The thing about the male species is that its greatest strength is in the ability to operate together, whether in brutality or camaraderie,” Taberner tells Australian Times. “Our own strength is in the collective … we’re not male show ponies who can sing amazingly high notes.”

Australia’s had its fair share of successful male music artists, from Bon Scott to John Farnham, but none hold a candle when it comes to manly singing like the Spookies.

“John Farnham is a lovely guy but he doesn’t sing in the comfortable male range. He sings up in the stratosphere, and most men can’t sing like that,” says Taberner. “But when a limited male voice is combined with other male voices, you access an intimate pool of masculine awesomeness.”

The group is proudly bringing the boy band back to where it belongs. Their singing covers range from the haunting “Ghost Riders in the Sky” to the ironic “Am I Not Pretty Enough?”, as well as original songs warning against interfering with a man’s tool shed.

“It’s easy for men to go unchecked when they’re young. Men can easily go off the rails, which is why we need something like a community choir or similar to guide us back to the better part of ourselves.”

Not that the group of 16 Antipodeans would be breaking into Dick Smiths and Jeans West stores back home without a weekly singalong. The self-described “tree-huggers, graphic designers, doctors and lawyers” are all valued members in their small communities in NSW and WA. But when they go on tour, these men are transformed into modern-day warrior-bards, exploring the fine line between thug and wimp, embodying unapologetic and non-abusive masculinity.

Still, just because Australia’s turned out the manliest music group since Cold Chisel doesn’t mean everything’s okay Down Under.

“In a singing sense, Australia still languishes far behind the UK,” admits Taverner. “You look at what Poms get up to on the football field or the local pub or even in the Barmy Army – there’s still a sense that men singing is acceptable. Not so in Australia.”

Regardless of our flannel shirts, slabs of beer and tray-top utes, Aussie males are merely compensating until they’re willing to sit down and sing a song around a fire.

Even if it is Kasey Chambers.