It has been announced that Australia’s musical darlings, The Temper Trap, will play a free concert in Hyde Park during the Olympics as part of the BT London Live festival. 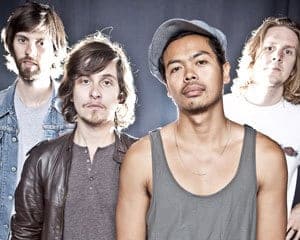 WITH less than a month to go until the hugely anticipated start of the London 2012 Olympic Games, it’s an Australian group’s participation in the festivities that’s got everybody talking. The Temper Trap – that Aussie (now international) music phenomenon – will be playing a free concert in Hyde Park on Friday, 10 August as part of the BT London Live festival.

The popular band, best known for their global hit ‘Sweet Disposition’, will join a host of sensational artists including Tom Jones, McFly, Newton Faulkner, The Beat and Saint Etienne — with more artists yet to be named. The concerts are totally free and open to all members of the public, plus giant outdoor screens will be screening all of the Olympic Sports and Medal Ceremonies of the day live, in addition to a spectacular array of have-a-go activities.

But The Temper Trap aren’t the only Aussies to feature at the BT London Live festival. The Overtones, “the UK’s hottest vocal harmony group”, will also be taking the stage and as the band’s booming baritone Lachie Chapman is also an Aussie, Australia is set to be very well represented at the outdoor concerts. The Overtones will play on Thursday, 9 August.

For more information, updates and details, visitors can go to BTLondonLive.com