FACE THE FESTIVAL 2013 | Having learnt the hard way about many hidden pitfalls of the British festival during a number of UK summer musical festivals, we feel it our duty to dispense the following Festival To Do List. Here is the Top 5 things to do at a music festival.

by Amber Rose
in Lifestyle 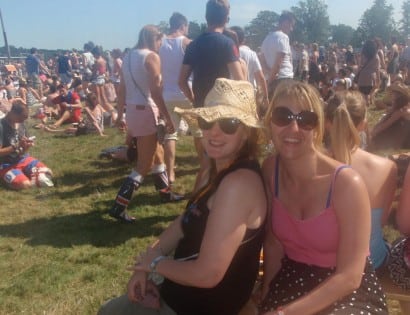 SO YOU and your mate are talking about your to-do list for the upcoming British “summer”.

“This one is a must do,” states your friend.

“Let’s go camping for 3 days, with ninety thousand other people. It’ll probably rain most of the time and everything from water to beer to a burger will be extortionately priced. It will be a mission to get in, a mission to get out, more than likely we’ll have some valuables stolen and at some stage of the weekend we’ll be unable to find our tent.”

Only the words they’ve actually said are: “We’ve just GOT to go to a proper British festival while we’re here!”

What is it about festivals? They’re expensive, they’re a hassle to attend, and they make us lower our hygiene standards to a level that would normally be intolerable. And yet, they are indeed a must do, especially when in Britain.

I find it quite amusing that a country with such uncooperative summer weather has such a culture of summer festivals. From May through to September, there is a seemingly endless array to choose from, with something for every musical taste.

Having been to a number of festivals back home, I knew that I had to experience one in the UK before heading back. It’s funny how the memories of poorly erected tents collapsing in the dawn hours, sore arms from carrying loads of luggage for miles and toilets so foul they make your eyes water seem to melt away from memory the minute arrangements to attend another festival commence.

So far I’ve managed two festivals while over here — Electric Picnic in Ireland, during my younger years in 2006, and more recently last year’s V Festival in Chelmsford, Essex.

Having learnt the hard way about many hidden pitfalls of the British festival during these two weekends, I feel it my duty to dispense the following FESTIVAL TO DO LIST.

If you’ve been living in the UK any amount of time before now, you’ll probably already of thought of this. But prepare and pack for ALL WEATHERS. Rain, hail, sun, snow, tornado. From your tent to your clothes. For example, for the festival I went to in Ireland, my friend and I forgot the fly cover for our tent. After smugly putting our tent up in the glorious sunshine, I woke up at 4am on the first night lying in a puddle, and stayed wet for the rest of the (very rainy) weekend. But then at V Festival, the weather was unbelievably hot and dry, and I remember having a conversation with one girl who could hardly walk because all she had brought were her oh so trendy Hunter wellies, which had given her colossal blisters in the heat.

Choose your neighbours wisely. Attending a festival inevitably means being in very close quarters with many strangers for a prolonged period of time. If you’re a slightly more mature festival goer who wants to get a little bit of sleep at some point of the weekend, probably best not to set up camp next to the 18 year old “lads” necking Red Bull.

Also be mindful that you’ll probably be trying to find your tent at some point of the weekend in the pitch black, after one too many warm beers. So try and grab a spot near something that might serve as a landmark. At V Festival we set up near a kebab van, which was actually perfect for soaking up those warm beers in the pitch black before kipping down for the night.

Arrange your travel to the nth degree. Whichever way you arrange it, it’s probably going to be a bit of a mission getting to the campsite. When going to the festival in Ireland, my friend and I booked a coach from Dublin, thinking it would drop us at the festival door. Instead we ended up in some village in the middle of the countryside with no clue where to head next. Luckily we managed to get a taxi with some other baffled foreigners who’d made the same mistake and we made it to the grounds, but it ended up being more expensive than our original outlay.

Also, be early. The other thousands of festival goers are going to want a good spot near the kebab van too, so make sure you beat them to it by getting to the camping grounds as soon as you can. And make sure that you’re close to the toilets — but not too close! 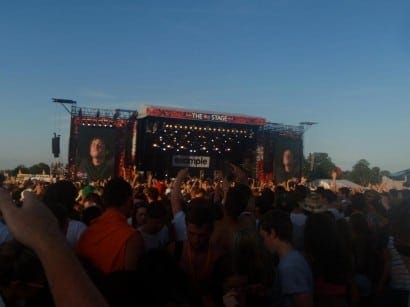 A creature of comfort

Despite what the glossy mags would have you believe, a festival is not the time for a fashion parade. Dress as comfy as possible, and don’t take ANYTHING you’d be upset to lose, from clothes to jewellery. Thieves deliberately target festivals in the UK, and it’s more likely than not that if you leave something valuable unattended it’ll go walkabout.

You don’t want to spend the whole weekend stressing about the whereabouts of your expensive camera or your iPhone, so I suggest buying a prepaid £10 ‘brick’ phone for the weekend and making do with disposable cameras — I’m sure Facebook will survive without you for three days, plus you’ll be having too much of an amazing weekend to have time to update your status anyway, surely!

Stick to a schedule

Get a programme as soon as you can, and know who you want to see and when. The sheer size of many UK festivals means that many acts will be on at the same time, and sadly you may have to make some tough choices if your favourites are on at the same time. At a festival like V the stages are quite far away from each other so don’t think you can watch 10 minutes of one act and then ‘pop over’ to another stage for someone on at the same time, you’ll probably end up missing the better part of both and getting extremely agitated trying to barge your way through the crowds in the meantime. Make a list of your “must see” sets and stick to it!

If you’re a seasoned festival goer you’ll probably already know everything I’ve just covered. But even after many festivals back home in Oz I found the sheer size and volume of people at UK festivals makes for a whole new experience, and you really can’t be too prepared. And after it’s all over, not only will you have your memories, you’ll also be able to trump any Australian festivals with your bragging rights — “So you went to Homebake this year? I’ve been to Glastonbury mate!”